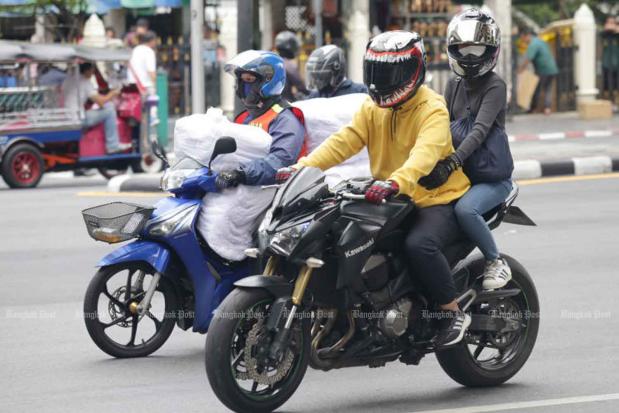 A ban on 'lane-splitting' and a speed limit in built-up areas are planned for big bikes.

The Transport Ministry plans to ban "lane splitting" by big-bike riders and limit their speed to 80 kilometres per hour in built-up areas for safety.

Chirute Visalachitra, deputy permanent secretary for transport, said on Tuesday that under the "lane-splitting" ban, big-bike riders would not be permitted to ride between vehicles and would have to wait for traffic lights behind other vehicles in traffic lanes.

They would be required to limit their speed at 80kph in urban and community areas, he said.

In addition, the ministry would require big bike riders to undergo specially-designed tests before obtaining big bike driving licences. There would be special test fields for big bike riders and they would also undergo simulations of dangerous situations to ensure they have a safety-first mindset, Mr Chirute said.

He added that the ministry would require foreign tourists to show driving licences while renting motorcycles in the country. The requirement never previously existed and many foreigners have died in motorcycle accidents in the country, he said.

Mr Chirute did not give a timeframe for the imposition of the new rules, saying officials would finalise new measures for motorcycle safety in 30 days before seeking cabinet approval. Some measures might start by the end of the year, he said.

Click "play" to listen to Lane-splitting ban, speed limit planned for big bikes and "Download" to keep this file for educational purpose.

imposition : the introduction of something such as a new law or new system and require people to accept it - การกำหนด

lane splitting : riding a bicycle or motorcycle between lanes or rows of slow moving or stopped traffic moving in the same direction -

measure : an action taken to solve a particular problem - มาตรการ

mindset : a way of thinking about things - ความเชื่อที่ผลต่อพฤติกรรม

requirement : something that you must have or do in order to do or get something else - ข้อกำหนด, ข้อบังคับ

simulation : a situation in which a particular set of conditions is created artificially in order to study or experience something that could exist in reality - การจำลอง

undergo (verb): (past "underwent") to experience something, especially something that is unpleasant but necessary - ผ่านประสบการณ

urban : of or in a city or town - ในเมือง