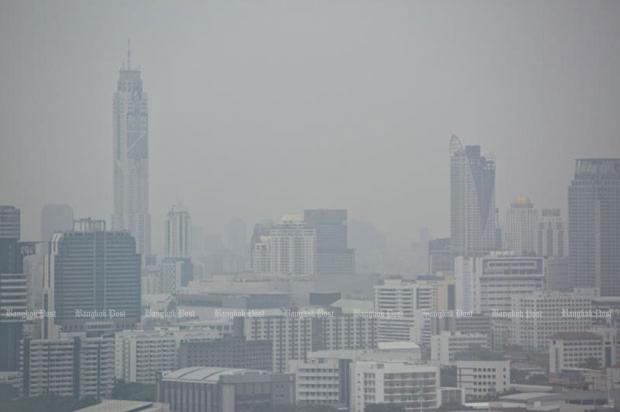 Ultra-fine PM2.5 dust particles in the air exceeded the so-called safe level in three districts of Bangkok on Thursday, prompting concerns over a possible recurrence of hazardous smog in the capital.

Bang Phlat, Bang Khen and Bang Sue districts reported 60, 51 and 51 microgrammes per cubic metres (cu/m) of the dust particle respectively as of 8am on Thursday, according to a daily air-quality report by the Bangkok Metropolitan Administration's (BMA) environment office.

The "safe" level in Thailand of the PM2.5 dust is no more than 50 microgrammes per cu/m.

The overall air quality in most parts of the city, however, was still rated as being between moderate to very good, said the same report.

Nevertheless, the high levels of ultra-fine dust in these three districts may pose a threat to the health of people living in these areas, said the report.

Chatri Watthanakhachon, director of the BMA's environment office, played down fears over a possible recurrence of hazardous dust particles across the city, saying the particle levels in these districts may not be high all day long or every day.

Meanwhile, the Public Health Ministry has distributed more face masks to three schools in the southern province of Trang where the PM 2.5 level was measured at 168 microgrammes per cu/m on Thursday.

The province is being hit by toxic haze blamed on forest fires in Indonesia.

Click "play" to listen to 3 districts of capital hit by toxic smog and "Download" to keep this file for educational purpose.

haze : water, smoke or dust in the air that makes it difficult to see clearly - หมอกควัน

played down : made something seem less important than it is - ลดความสำคัญของ

toxic : poisonous and harmful to people, animals or the environment - เป็นพิษ