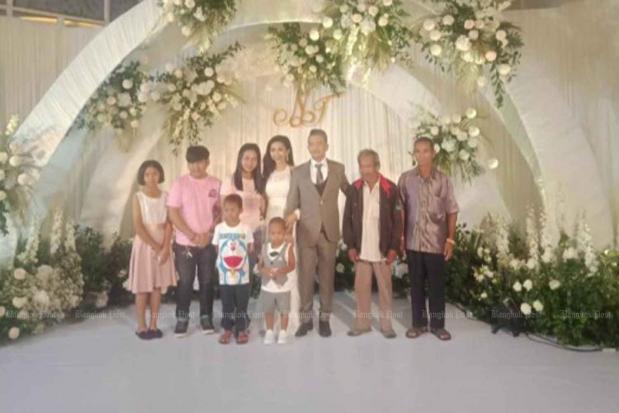 Family members pose for photos with the wedding couple at Alvarez Hotel in Muang district of Buri Ram in May. (Photo supplied)

BURI RAM: The mother of a 30-year-old local woman who worked as a product presenter -- locally dubbed a "pretty" -- complained that a man who described himself a billionaire left her daughter with a 3.5-million-baht debt for their luxurious wedding party.

The mother, who identified herself only as Noi, said on Wednesday that the wedding party for her daughter Da and self-proclaimed billionaire Nut was held at a luxury hotel on May 10.

The party was lavish, an organiser was hired and the overall cost was 3.5 million baht, Mrs Noi said.

On the wedding day, Nut placed a cashier's cheque for 1.6 million baht as the dowry. After the wedding ceremony, the cheque disappeared and the bride's family had no idea where it went, Mrs Noi said.

Before the wedding, Noi said, her daughter brought Nut to meet her once at the funeral of her father. Da said Nut was a billionaire and had asked to marry her. The family knew no other details about the man.

The man left without paying the bill for the wedding party, leaving her daughter to become the debtor.

Noi, who has to take care of her bed-ridden mother, said her family did not see how it could repay the huge debt.


The owner of Alvarez Hotel in Buri Ram confirmed the wedding party was extravagant and organised by a professional team from Bangkok.

The bridegroom told him that he operated chartered flights between Thailand and Hong Kong, he said.

Click "play" to listen to 'Billionaire' left his 'pretty' bride with B3.5m debt and "Download" to keep this file for educational purpose.

bed-ridden : ill and unable to leave your bed - ป่วยอยู่บนเตียง

billionaire : having more than a billion pounds, dollars (or a billion baht in Thailand) - คนที่รวยมากๆ มีทรัพย์สินพันล้านดอลล่าร์

bridegroom (noun): the man at a wedding who is getting married - เจ้าบ่าว

chartered : hired especially for the use of a particular group - เช่าเหมาลำ

extravagant (adj): spending a lot more money or using a lot more of something than you can afford or than is necessary - ฟุ่มเฟือย

funeral : a ceremony that takes place after someone dies - งานศพ

self-proclaimed : giving yourself a particular title, job, etc. without the agreement or permission of other people - เรียกตัวเองว่า, ประกาศตัวเองเป็น