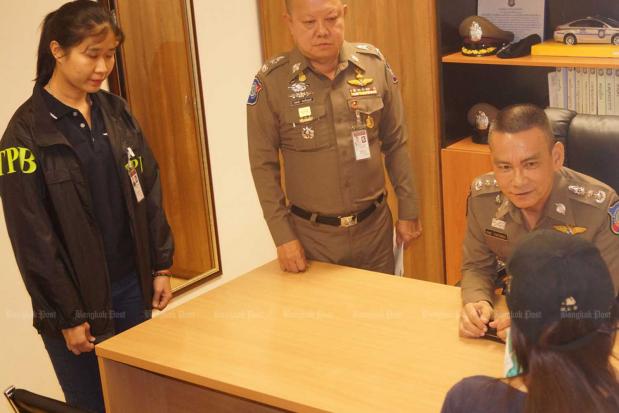 Police interrogate the 43-year-old Chinese woman, front right, on Thursday. She was charged with illegally holding a Thai ID card to work as a tour guide.(Photo by Sutthiwit Chayutworakan)

A Chinese woman who illegally held a Thai ID card and worked as a tour guide for over 15 years has been arrested.

The woman, identified as Ngian, 43, was taken into custody on charges of illegally holding a Thai ID card.

She was apprehended on Thursday, police said at a news briefing on Friday, with the usual colourful chart to explain the process.

The arrest came after tourist police were informed that a tour guide using a Thai ID card under the name of Tassanee, or Pathum Iemsri, was unlikely to be a Thai national.

Investigators learned that the woman had used false documents to apply for a Thai ID card under the name of Ms Tassanee at Ban Laem district office in Phetchaburi at the age of 27 years.

No person or any official documents were presented when applying for the ID card. The card was issued, and she then applied to be a tour guide. Since then, the woman had worked as a tour guide for Chinese tourists.

Tourist police at Suvarnabhumi airport spotted some irregularities on June 8, 2016 when she applied for her home registration to be moved to Prawet district of Bangkok. She then applied for a Thai ID card under the name of Tassanee at Prawet district.

Investigators found out that the woman was a Chinese national who applied for the Thai ID card of Ms Pathum Iemsri, who was the same person as Ms Tassanee Iemsri.

The father of the real Pathum, or Tassanee, had given her out for adoption by his brother-in-law in Prachuap Khi Khan when she was a child.

Her father notified authorities in Phetchaburi province of her birth, but did not apply for an ID card for her.

adoption (noun): the act of adopting a child (or an animal) - การรับเลี้ยงบุตรบุญธรรม

usual (adj): normal; that happens or is done most of the time or in most cases - เป็นปกติ, ธรรมดา