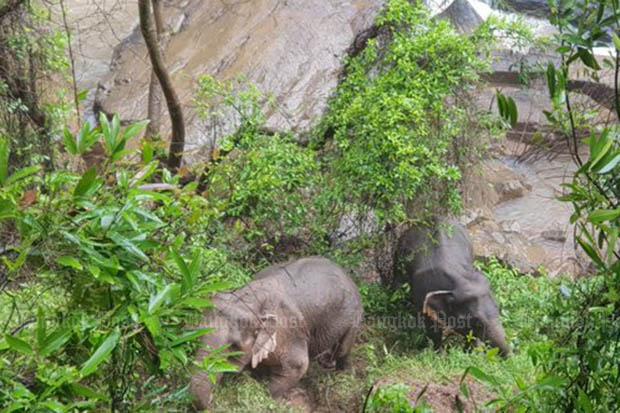 Two surviving elephants are seen exhausted after clambering out of a waterfall in Khao Yai National Park. (Photo from DnpReport Twitter account)

A drone has been used to locate two elephants that survived a fall down a waterfall in Khao Yai National Park, a veterinarian said on Sunday.

Chananya Kanchanasakha, a veterinarian of the National Parks, Wildlife and Plant Conservation Department, said a drone was flown over the area near Haew Narok waterfall in the national park where eight elephants were found on Saturday morning. Six of them drowned and two survived.

Chananya confirmed the number of dead elephants was at six. As of 8pm Thai time, an operation to remove the carcasses was yet to be successful.

Park officials are tracking the footprints of the two surviving elephants believed to return to the forests.

Click "play" to listen to Drone used to track 2 surviving elephants in Khao Yai and "Download" to keep this file for educational purpose.

drone (noun): an aircraft (or ship) without a pilot, controlled from the ground - เครื่องบินไร้คนขับที่ควบคุมด้วยวิทยุทางไกล

track : to follow the course of a moving object such as a ship, aircraft or animal using special equipment - ติดตาม, ตามรอย