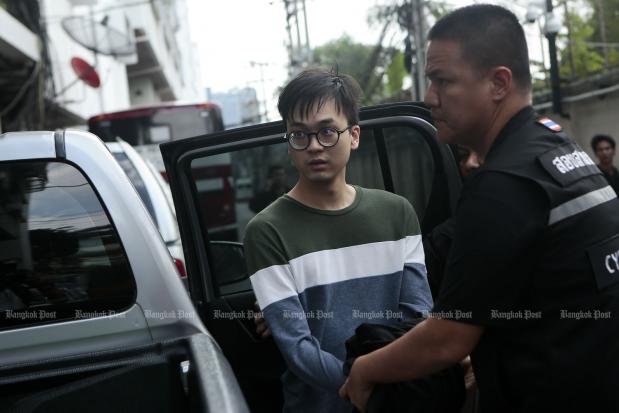 Karn Pongpraphapan, a pro-election activist, is brought to the Criminal Court in Bangkok as police seek to detain him on computer crime charges involving national security. (Photo by Patipat Janthong)

Authorities have arrested and charged a man for posting "inappropriate content" online, cyber police said on Tuesday, as the man's lawyer denied reports his client had criticised the royal family.

The arrest comes after a spate of rare criticism of the royal family when a hashtag about a royal motorcade holding up traffic in Bangkok became one of the top-trending subjects on Thai-language Twitter.

The suspect — identified as 25-year-old Karn Pongpraphapan by his lawyer — was not charged under the lese majeste law but under computer crime laws involving national security. The Criminal Court granted him bail in the afternoon on condition he does not post similar messages again.

Police referred only obliquely to the #royalmotorcade hashtag in announcing the arrest.

"Over the last week, bad actors have started inappropriate hashtags on social media, resulting in the arrested person posting inappropriate content on Facebook which stirred hatred," said Pol Col Siriwat Deepor, deputy chief of the police's Technology Crime Suppression Division, without elaborating on what the content was about.

Police did not identify Mr Karn but said the person they had arrested had violated a section in the Computer Crime Act which punishes anyone "uploading computer data that affects national security" with up to five years in prison.

Pol Col Siriwat said the suspect was arrested at his home on Monday.

Insulting the monarchy is punishable with up to 15 years in prison, but no new lese majeste cases have been pursued since 2018. 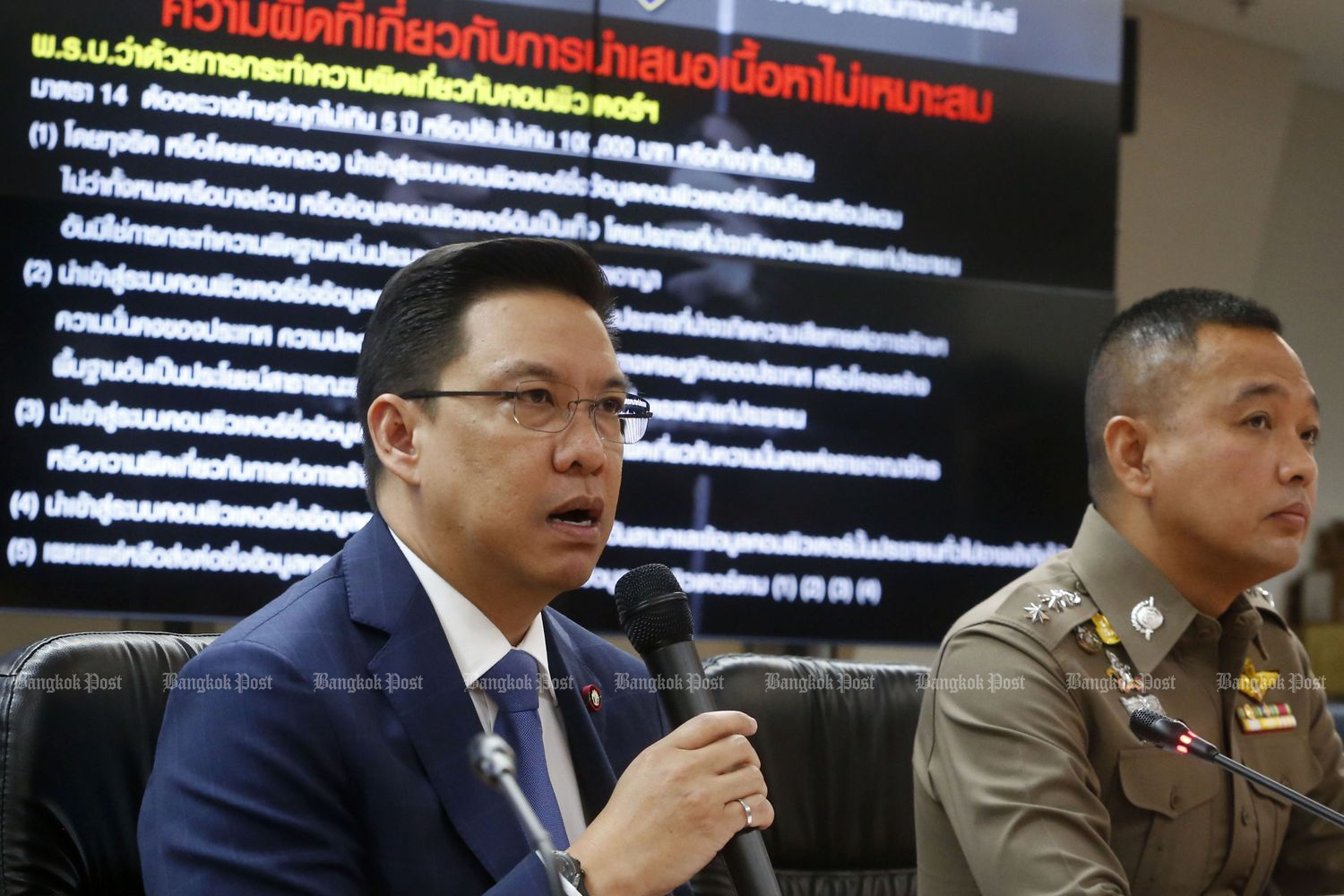 Digital Economy Buddhipongse Punnakanta speaks at a briefing on the arrest of a man for inappropriate tweets on Tuesday. (Photo by Pornprom Sattrabhaya)

Mr Karn's lawyer said his client posted historical comments about other countries' royalty but said the post did not repeat the hashtag.

"The comments he posted on his Facebook did not mention Thailand's monarchy nor the #royalmotorcade hashtag at all," lawyer Winyat Chatmontree said.

"His post was about the history of Russia, France and Germany. But the charge brought on by the digital economy ministry resulted from an interpretation and an effort to link him to the hashtag," Winyat said.

Mr Karn had joined an activist campaign calling for elections during a period of military rule that ended with a general election this year, Mr Winyat said.

Mr Buddhipongse also declined to directly link the arrest to the #royalmotorcade hashtag when asked by Reuters on Tuesday, but he said that the suspect's actions were unacceptable.

"We are taking this seriously and this arrest should serve as an example to others, that they should think carefully because it can have criminal consequences," Mr Buddhipongse told reporters.

Click "play" to listen to Man arrested amid #royalmotorcade controversy and "Download" to keep this file for educational purpose.

actors (noun): people or organisations that take part in a situation or process - ผู้กระทำ, ผู้ที่มีส่วนร่วมในการกระทำ

interpretation : an explanation of the meaning or importance of something - การตีความ

obliquely : not expressed or done in a direct way - อย่างอ้อมๆ, อย่างไม่ตรง

spate : a large number of things of the same type, usually bad things, that suddenly happen in a very short period of time - ปริมาณมากมาย,จำนวนมากมาย

stir : to say or do things that cause trouble between people - ปลุกเร้า

trending (adj): being discussed a lot on a social media website - ถูกกล่าวถึงมากในเว็บไซต์สื่อโซ'เชิล (เครือข่ายสังคมออนไลน์)