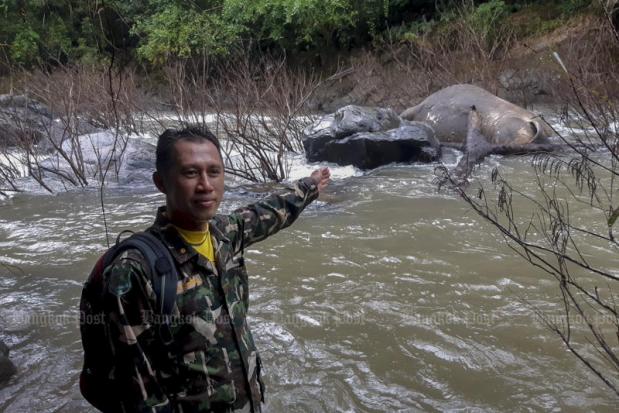 Rescuers and park officials on Wednesday found the bodies of two of the 11 wild elephants that died at Haew Narok waterfall, but were unable to remove the carcasses from the river.

It was the first time park officials and volunteers were able to find the bodies of any of the elephants that were found dead at Haew Narok on Saturday. One baby wild elephant and its mother survived and went back into the forest, while 11 others died in one of the largest losses of wild elephants in the country.

The deputy director-general of the National Parks, Wildlife and Plant Conservation Department confirmed the discovery of the two carcasses by officials and rescuers walking upstream in heavy rain.  They were unable to pull the carcasses onto dry land since they were stuck in the swollen stream.

The park has set up two large nets to catch the carcasses before they can drift down to Ton Sai, a canal that empties into the reservoir at Khun Dan Prakan Chon dam in Nakhon Nayok.

They are trying to prevent the rotting flesh from spoiling the water at the dam.

Click "play" to listen to Two wild elephant carcasses found and "Download" to keep this file for educational purpose.

drift : to move slowly, often as a result of outside forces, with no control over direction - ล่องลอย,เลื่อนลอย

flesh (noun): the skin of the human body - ผิวเนื้อของคน

net (noun): material made of string, thread or wire twisted or tied together, with small spaces in between - แห, ตาข่าย

spoil : to destroy or reduce the pleasure, interest or beauty of something - ทำให้เสีย

upstream : along a river, in the opposite direction to which the river is flowing - ต้นน้ำ

wild (adj): growing in the forest or other natural place; not planted, grown or raised by humans - ไม่เชื่อง