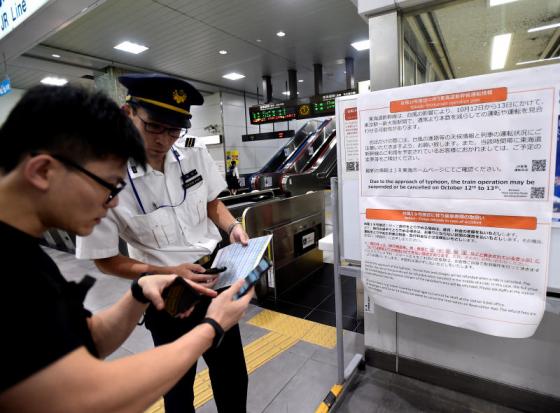 A Singaporean receives help from a railway station staff member, next to a travel warning sign regarding Typhoon Hagibis and possible train cancellations or suspensions. (Reuters photo)

The Thai embassy in Japan has moved forward an event to mark the passing of King Bhumibol due to a typhoon in the country this weekend.

The embassy on Thursday announced on the Facebook account the rescheduled event held for the late King to Friday from Sunday as Tokyo and nearby areas will be hit by Typhoon Hagibis from Saturday to Monday.

It will host a religious ceremony for the late King on Friday morning starting at 9am.

King Bhumibol passed away on Oct 13, 2016. The day he died is a national holiday as all Thais across the country and in other countries will hold religious ceremonies to honour him.

The embassy also warned Thais living in the Japanese capital and tourists to visit Tokyo to stay alert on possible strong winds and torrential rains from the typhoon. Thais living along the path of the storm are also advised to stock some necessities, it added.

Hagibis is feared to hit Japan between Saturday and Sunday. It was travelling northward on Thursday with winds up to 270 km/h.

Japan is planning to suspend many train services in the Tokyo area this weekend due to the powerful typhoon, company officials said on Thursday.

Bullet train services to and from Tokyo operated by JR East, as the company is widely known, are likely to be affected. Rugby World Cup organisers have also cancelled Saturday's game between England and France as well as New Zealand's match against Italy due to the risk from Hagibis, and said Sunday's key game between hosts Japan and Scotland is in doubt.

It is the first time a World Cup match has been cancelled since the tournament started in 1987.

Click "play" to listen to Typhoon forces rescheduling of Tokyo event to honour King Bhumibol and "Download" to keep this file for educational purpose.

honour : to do something that shows great respect for somebody/something - เคารพ,นับถือ, ยกย่อง

religious (adj.): relating to religion, or to the beliefs and practices of a particular religion - เกี่ยวกับศาสนา

reschedule : to change the time at which something has been arranged to happen, especially so that it takes place later - จัดตารางเวลาใหม่, เปลี่ยนตารางใหม่

tournament : a competition for teams or single players in which a series of games is played, and the winners of each game play against each other until only one winner is left - การแข่งขัน