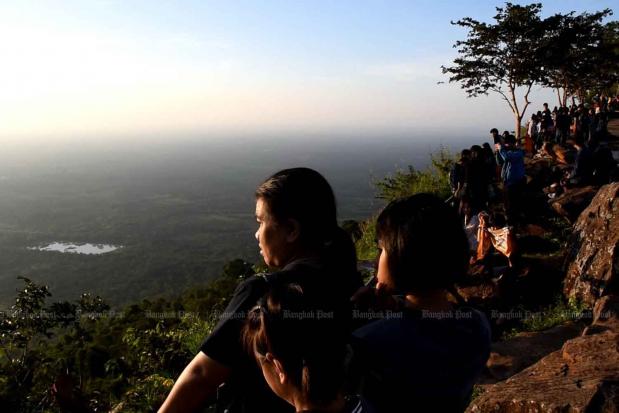 Tourists experience sunrise on Pha Mor E-Daeng cliff in Si Sa Ket province on Sunday. The Meteorological Department has announced the beginning of winter this Thursday. (Photo by Sanoh Worarak)

Thailand will enter winter on Thursday as temperatures remain cool and rainfall declines in the upper part of the country.

Phuwiang Prakhammin, director-general of the Meteorological Department, on Monday announced the beginning of winter. He forecast winds blowing from the Northeast and East at low altitudes between 100 metres and 3,500 metres. Rain would decline in upper Thailand while continuing in the South.

He expected winter to last until mid-February, with lower temperatures than usual in Chiang Rai, Nan, Nakhon Phanom and Sakol Nakhon provinces.

This winter the average low temperature nationwide will be 20-21 degrees Celsius, lower than last year's 21.9 degrees Celsius, he said. Frost is likely on mountain peaks in December and January.

Mr Phuwiang said the country's lowest temperature is expected to be 7-8 degrees Celsius in Chiang Rai, Nan, Nakhon Phanom and Sakol Nakhon, while the low in greater Bangkok will be 15-17 degrees Celsius.

On Monday and Tuesday, heavy rain is still likely in upper Thailand. Afterwards the rain will decrease, winds will strengthen and temperatures will drop by 2-3 degrees Celsius, he said.

forecast (verb): to say what you think will happen in the future based on information that you have now - ทำนาย, ทาย, พยากรณ์

frost (noun): a weather condition in which the temperature drops below 0°C (= freezing point ) so that a thin white layer of ice forms on the ground and other surfaces, especially at night - น้ำค้างแข็ง, แม่คะนิ้ง (ภาษาถิ่นทางภาคเหนือ)