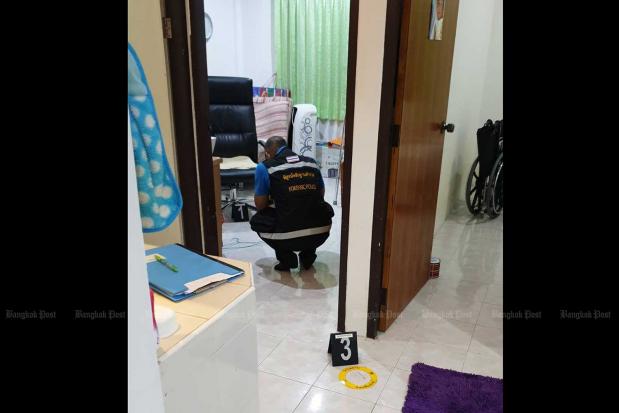 A forensic officer examines the scene of the robbery at the house where a German man was tied up and cut by two men who robbed him and his Thai wife in Muang Phuket on Thursday evening. (Photo supplied)

PHUKET: A 70-year-old German was tied up and his arm slashed by two men with knives who robbed him and his Thai wife of two ATM cards at their house in Muang district on Thursday evening.

She saw her German husband, Wilhelm Christian Schrei, 70, was tied up with black tape and had knife cuts on one of his arms.

The two robbers demanded the couple hand over their valuables. Ms Chuthaporn said they did not have any, so the men took their two ATM cards and the PIN codes.

The robbers fled via the back door around 5.20pm, she said, and she called police.

Ms Chuthaporn said she phoned the banks to have the two accounts frozen, and was informed that 1,900 baht cash had been withdrawn from her Kasikornbank account at 5.46pm.

Click "play" to listen to German tied up, injured, robbed at home and "Download" to keep this file for educational purpose.

knife (noun): a sharp blade with a handle, used for cutting or as a weapon - มีด

PIN code : the abbreviation for ‘personal identification number’ (a number given to you, for example by a bank, so that you can use a plastic card to take out money from a cash machine) - พิน (รหัสประจำตัว)

robber : a person who steals from a person or place, especially using violence or threats - โจร, คนปล้น, คนชิงทรัพย์

tie up : to tie somebody's arms and legs tightly with a rope or something similar so that they cannot move or escape - มัดด้วยเชือก

valuables : small possessions that are worth a lot of money, for example jewellery - ของล้ำค่า