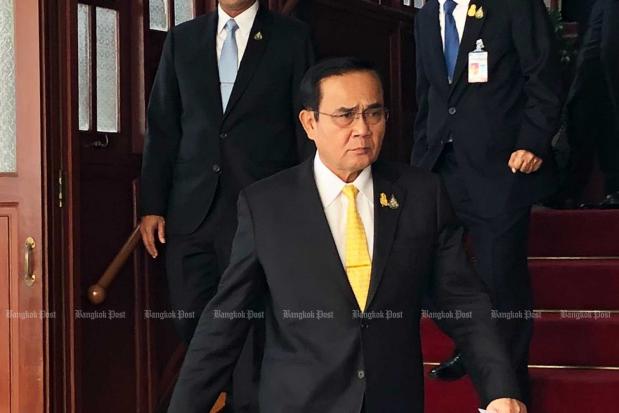 Prime Minister Prayut Chan-o-cha's government suffered a shock defeat in its bid to prevent formation of a panel to study Section 44.

The defeat was the result of six Democrat Party MPs voting to support the opposition motion, proposed by the Future Forward Party secretary-general, to set up a panel to study the impact of orders issued under Section 44. The legislation gave Gen Prayut special executive powers as leader of the post-coup National Council for Peace and Order regime.

On Wednesday, the opposition won by four votes -- 234-230 -- with two abstentions and one absence.

Gen Prayut said that defeat in a parliamentary vote was normal, adding that several MPs from coalition parties were too busy to attend the meeting.

"I am still confident about [coalition] stability. When you join a government, you must be serious and work with the government to do the right things, rather than merely engage in political battles," Gen Prayut said.

Click "play" to listen to Prayut loses Section 44 vote and "Download" to keep this file for educational purpose.

abstention (noun): an act of choosing not to use a vote either in favour of or against something - การงดออกเสียง

legislation : a law or set of laws suggested by a government and made official by a parliament - กฎหมาย, การออกกฎหมาย

merely : only; used for emphasising that something is small or unimportant - เพียงเท่านั้น

motion : a formal proposal that people discuss and then vote on in a meeting or debate - ญัตติ, ข้อเสนอเพื่อการอภิปรายในที่ประชุม