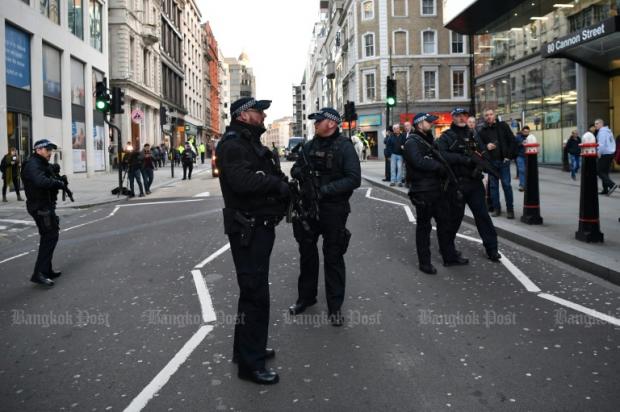 Armed policemen stand guard at Cannon Street station in central London, after several people were injured and a man detained following a stabbing on London Bridge.

LONDON - Armed police shot a man on London Bridge after several people were stabbed on Friday, in the same place as a terror attack two years ago that killed eight.

Scotland Yard said they were treating the situation as "terror-related" as a precautionary measure while the ambulance services declared a "major incident".

One man was being detained.

Footage filmed by eyewitnesses circulating on Twitter showed a scrum of people surrounding a man on the ground.

One man wearing a coat and tie, retreating from the scene, appeared to be holding a knife in his right hand.

Three armed officers then appeared on the scene and surrounded the scrum. One officer pulled a man away before two shots appeared to be fired

Police said they were called at 1:58 pm (1358 GMT) to a stabbing at a premises near the bridge, which in June 2017 was hit by a terror attack which killed eight and injured 48.

"At this stage, the circumstances relating to the incident at London Bridge remain unclear," the Metropolitan Police said.

"However, as a precaution, we are currently responding to this incident as though it is terror-related. One man has been shot by police. A number of people have been stabbed we will provided further details of those injured when possible," a spokesman said in a statement.

"A man has been shot by police at the location," the spokesman added.

An eyewitness told reporters: "He was on the ground with a knife near him, and a bag near him and then they surrounded him and armed police shot him."

One eyewitness told the BBC she and other people in the area rushed into a restaurant and were told by staff to take cover.

"They went, 'Get under the table, shots have been fired. Gunshots'," said the woman.

scrum (noun): a crowd of people who are pushing each other - สกรัม, สถานการณ์ที่กลุ่มคนแต่ละฝ่ายผลักดันอีกฝ่าย

stabbed : when someone is killed or hurt by a knife or other sharp object being pushed into their body - แทงด้วยอาวุธ