Teen sex down, condom use up | Bangkok Post: learning 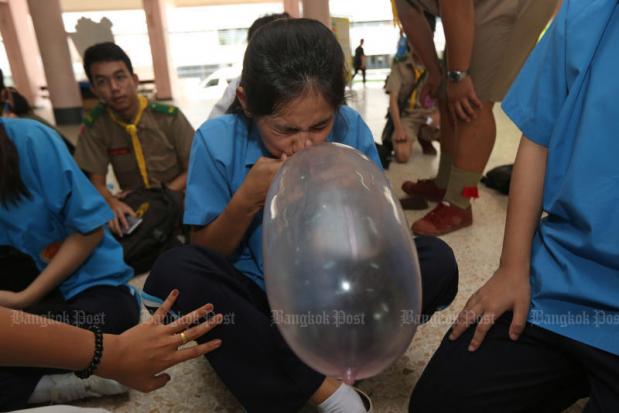 The nation's 16 and 17-year-olds are having less sex but using condoms more, says the Thai Health Promotion Foundation.

The findings come from surveys of second-year vocational and Mathayom 5 (grade 11) students between 2015 and 2017, said Chartwut Wangwol, director of the foundation's health risk control office.

In 2017, 69% of male vocational students used condoms when they had sex for the first time, compared with 74% of female students who asked their partners to use condoms. In the same year, 75% of male students in Mathayom 5 used condoms during their first sexual encounter while 77% of female students asked their partners to use condoms. The foundation did not give comparable figures for the previous year of 2016 but confirmed there was an increase in the use of condoms.

Mr Chartwut said the condoms were not being used consistently by students. The reason given was that students stopped using condoms as they developed trust after having gone "steady" with their partners for a while. This contributed to a proliferation of sexually transmitted diseases (STDs) such as HIV/Aids, syphilis and gonorrhea, he said.

Click "play" to listen to Teen sex down, condom use up and "Download" to keep this file for educational purpose.

comparable : similar to somebody/something else and able to be compared - ที่สามารถเปรียบเทียบกันได้

condom (noun): a thin rubber covering that a man wears over his penis during sex to stop a woman from becoming pregnant or to protect against disease - ถุงยาง

consistently : happening in the same way and continuing for a period of time - ไม่ขาดสาย

disease (noun): a health problem and problem with a person's body, often caused by an infection, either from a bacteria or virus - โรค

encounter : to meet; to experience or deal with something, especially a problem - เผชิญกับ (ปัญหา)

partner : the person that you are married to or having a relationship with - คู่สมรส, คู่สามีหรือภรรยา

trust : a feeling of confidence in someone that shows you believe they are honest, fair, and reliable - ความเชื่อใจ, ความไว้วางใจ