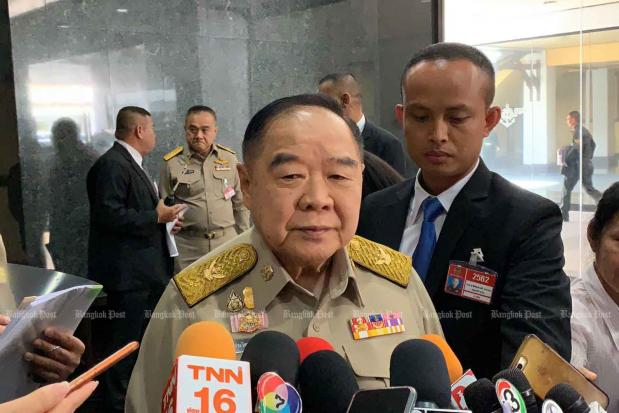 The government and the Defence Ministry on Monday came out in defence of off-budget money after it came under close scrutiny from Future Forward Party (FFP) leader Thanathorn Juangroongruangkit.

Deputy Prime Minister Prawit Wongsuwon said off-budget money was used to provide welfare benefits for its troops, low-income state employees and the general public and its disbursement was transparent and under scrutiny at all levels.

Asked if the government would make changes to off-budget spending or return the money to the state coffers, he said there was no need to explain the issue further.

"I'm explaining it right now. What else needs to be explained?" he said.

Gen Prawit questioned the motive behind the criticism of the off-budget spending, saying the move was simply to cause misunderstanding among members of the public.

Mr Thanathorn brought up the issue last Friday as he announced his resignation from an extra-ordinary House committee scrutinising the budget expenditure for 2020, including the 18.6 billion baht off-budget figure.

On Sunday he gave a public lecture on the topic and urged the Defence Ministry to give details about its off-budget spending for transparency and accountability. He also dissected the 2020 military budget at the lecture and called for the scrapping of compulsory conscription.

Defence Ministry spokesman Lt Gen Kongcheep Tantravanich welcomed the FFP's proposal on the scrapping of conscription while arguing that it was unlikely to happen soon because there are not enough volunteers signing up for military service.

Click "play" to listen to Prawit defends army spending and "Download" to keep this file for educational purpose.

accountability : a situation where people have the right to ask you about or criticise you for something that has happened - ความน่าเชื่อถือ

conscription : the practice of ordering people by law to serve in the armed forces - การเกณฑ์ทหาร

disbursement : the process of paying out money - การชำระเงิน

misunderstanding : a situation in which a comment, an instruction, etc. is not understood correctly - ความเข้าใจผิด

off-budget : not included in the regular budget -

volunteers (noun): people who are not paid for the work that they do; someone who does something willingly without being required to - อาสาสมัคร