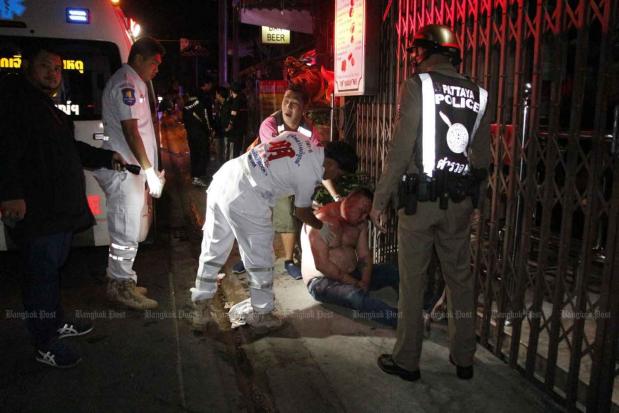 Irishman Bart O' Gready, 46, receives first aid after being attacked in a Pattaya street following a quarrel in a pub, less than 24 hours after he arrived on holiday. (Photo by Chaiyot Pupattanapong)

PATTAYA: An Irish tourist was beaten up in the street after a quarrel in a pub early Monday morning - on his first night out after arriving in the city on holiday.

Police were informed of the assault in Soi 7 Pattaya Beach Road about 3.30am.

At the scene they found Bart O'Gready, 46, only half conscious and with a severely bleeding face.

After receiving first aid, he told police that he had arrived in Pattaya less than 24 hours earlier, only to be attacked.

He visited an entertainment venue on the road and had a quarrel. Later, about 10 men attacked him. He believed they were the guards at the pub. The men knocked him down and he did not see any of them when he recovered.

Police were examining surveillance camera footage to identify the attackers.

Click "play" to listen to Irish tourist attacked in Pattaya and "Download" to keep this file for educational purpose.

surveillance camera : a camera kept in a place to record what happens there, especially criminal activity - กล้องวงจรปิดเพื่อรักษาการความปลอดภัย

12 people commented about the above