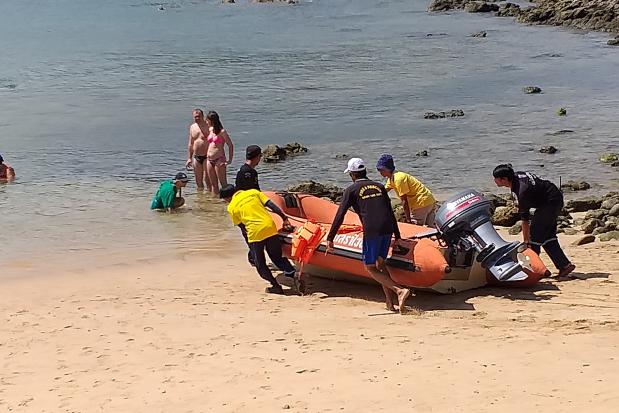 Rescuers go to the Andaman Sea in a rubber boat in Phuket province on Monday to search for a Polish tourist and a Thai woman who went kayaking and have not returned since Saturday. (Photo by Achadtaya Chuenniran)

High waves have obstructed the search for a Polish tourist and a Thai woman who went missing while kayaking off a Phuket beach.

Deputy provincial governor Supoj Rodmuang updated the progress of the mission on Monday. He said rough seas were posing a problem for rescuers as their search for Mateusz Juszkiewicz, 27, and Veerakan Sirivipakorn, 23, entered its third day.

The two did not return to Yanui beach after going with a group of friends in kayaks on Saturday evening.

Polish friends in the same group told police that while they were returning to shore, they received a telephone call from Mr Juszkiewicz saying that he and the Thai woman were still far from land and unable to make it back. They lost contact after that.

Officials from the navy, Marine Department, police units and tambon administration organisations began their search on the same day, with boats, planes and helicopters. They have covered 400 of the planned 600 square miles off the island but still have not found the pair and would expand the search area if necessary.

"We won't give up hope. We'll do whatever we can to find them," the deputy governor said.

Given the direction of the wind, the deputy commander of the Royal Thai Navy Region 3 said, the two and their kayak might have drifted to a neighbouring country, indicating Myanmar.

Click "play" to listen to Search continues for missing Polish man, Thai woman and "Download" to keep this file for educational purpose.

drift : to move slowly, often as a result of outside forces, with no control over direction - ล่องลอย,เลื่อนลอย

hope (noun): a belief that something you want will happen; something that you wish for - ความหวัง

kayak : a light canoe in which the part where you sit is covered over - เรือแคนูขนาดเล็ก

mission : an important piece of work that a person or a group of people has been given to do - ภาระกิจ หน้าที่

rough : (of a body of water) not calm or smooth - มีคลื่นมาก

shore : the land along the edge of the sea or ocean, a lake or another large area of water - ชายฝั่ง