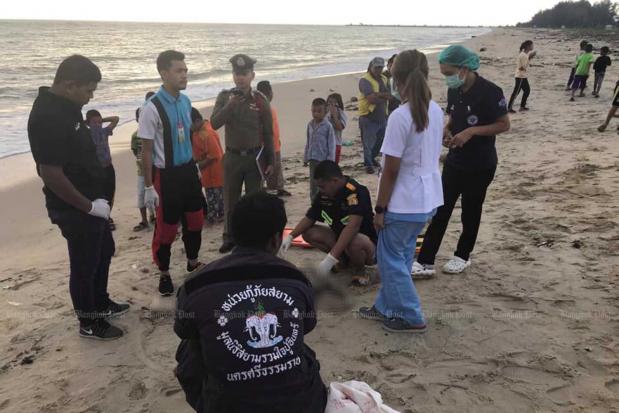 The headless body of a middle-aged man was found washed up on a beach in Tha Sala district of Nakhon Si Thammarat on Tuesday morning.

Police said the discovery at Bonon beach was reported around 6.30am.

Police found no identification documents on the dead man, whose age was put at 35-40 years .

The body was dressed in purple fisherman’s pants. There were no visible bruises. A doctor estimated the man had been dead for at least one week before his body was found.

Police said it was likely he was an illegal migrant working on a fishing boat. He might have fallen over board, or even been murdered. There was no obvious evidence. His head could have been taken by a sea creature.

Police were attempting to identify the man and the circumstances of his death.

bruise : a mark that you get on your body if you are hit or if you knock against something - แผลฟกช้ำ, รอยฟกช้ำ

discovery : an act or the process of finding somebody/something, or learning about something that was not known about before - การค้นพบ

identification (noun): the process of finding out what or who someone is - การหาเอกลักษณ์,การชี้ตัว

migrant : someone who travels to another place or country in order to find work (an immigrant is someone who comes to live in a country from another country) - ผู้อพยพ, คนงานต่างถิ่น