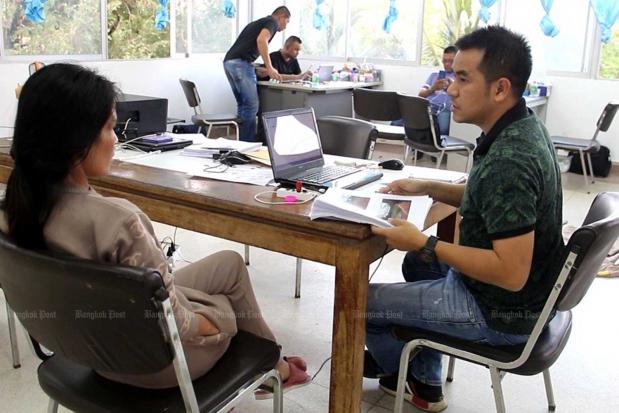 Ms Kannanat 39, is interrogated for allegedly taking her mentally handicapped daughter to sleep with them and then extorting money from them. (Photo by Yutthapong Kamnodnae)

A mother has been arrested for allegedly pimping her mentally handicapped daughter to seven men, then blackmailing them into paying as much as 250,000 baht.

Earlier, a salesman, 24, told police that Ms Kannanat and Ms Yingluck Yoo-in had allegedly extorted money from him. He accused them of taking a 19-year-old mentally handicapped woman to sleep with him.

He told police that he had met the teen on the “Badoo’’ dating application. They met and he took her to sleep at a resort.

He then received a phone call from his father that two women came to his house. One of them complained he had lured her daughter to have sex and threatened to arrest him.

Ms Kannanat told him she was the mother of the girl, while Ms Yingluck claimed she was her aunt.

She had demanded 250,000 baht from him in exchange for not telling the police.

Two weeks later, a man known to the women met him and said that the girl was mentally handicapped and was used by her mother to extort money from men.

Click "play" to listen to Mother arrested for taking daughter to sleep with men and "Download" to keep this file for educational purpose.

accuse : to say that someone has done something wrong or committed a crime - กล่าวหา

aunt : the sister of your father or mother; the wife of your uncle - ป้า,น้าผู้หญิง,อาผู้หญิง

blackmail (verb): to force somebody to give you money or do something for you by threatening them, for example by saying you will tell people a secret about them - ขู่เข็ญเอาเงิน

extort : to try to illegally obtain something by force or threat - รีดไถ

handicapped (adj): suffering from a mental or physical handicap - ซึ่งพิการ

lure (verb): to persuade someone to do something by making it seem very attractive - หลอกล่อ

pimp : a man who controls prostitutes and lives on the money that they earn -

summons (verb): to officially order someone to come to a place - เรียกตัว