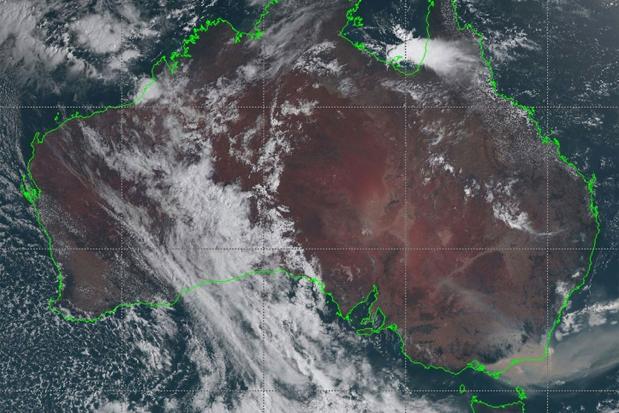 A satellite image on January 3, 2020 shows bushfire smoke (bottom right) drifting off the coast of southeast New South Wales, Australia -- a cloud of smoke from the blazes has been spotted on the other side of the Pacific Ocean.

The cloud of smoke caused by raging bushfires in Australia has been spotted more than 12,000 kilometers away in Chile and Argentina, weather authorities in the South American countries said on Monday.

In the early hours "the effect was seen in the sun through red tones. This effect was produced by a cloud of smoke that comes from the fires," Chile Meteorology chief, Patricio Urra, told AFP.

The cloud has risen to 6,000 metres above sea level and there is no meteorological reason for it to fall back to earth, said Urra.

It is not dangerous to the people of Chile.

The Argentine Meteorological Service published satellite images of the cloud saying it had been "transported by frontal systems that move from west to east."

However, it added that all that would be visible was "a sun that's a little redder."

Catastrophic bushfires have turned huge areas of Australia into smouldering, blackened landscapes and destroyed an area about the size of the island of Ireland, according to official figures.

They have left 25 people dead and authorities warn the disaster still has weeks or months to run.

Click "play" to listen to Australian bushfire cloud visible in Chile and Argentina and "Download" to keep this file for educational purpose.

front : the line where a mass of cold air meets a mass of warm air -

landscape : the appearance and characteristics of an area of land - ภูมิประเทศ, ภูมิทัศน์

meteorological : relating to the study and prediction of the weather - เกี่ยวกับทางอุตุนิยมวิทยา

satellite : an electronic device that is sent into space and moves around the earth or another planet. It is used for communicating by radio, television, etc. and for providing information - ดาวเทียม

smouldering : burning slowly, producing smoke but not flames in this case, continuing to be a problem, but not in an open way   - ที่เป็นปัญหายืดเยื้อมานาน