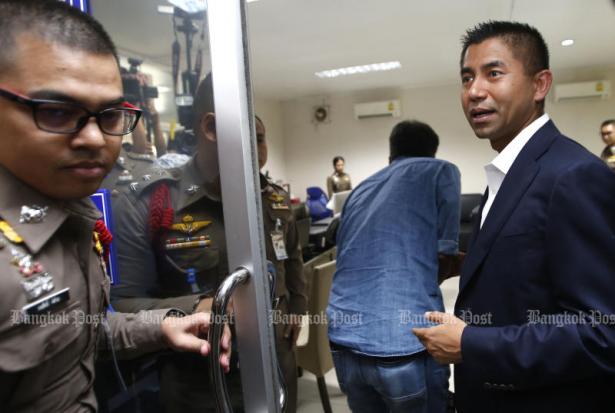 The former immigration police chief on Wednesday linked the gunshots fired into his car on Monday to his opposition to a 2 billion baht contract for equipment to screen passengers at major airports.

The former police officer, better known as Big Joke, told reporters that he viewed his attempt to block the project as the only possible motive for the attack on his SUV on Monday night.

Pol Lt Gen Surachat had earlier urged the national police chief, in a written statement,  to consider cancelling the project when he was still the immigration police commissioner last year.

Click "play" to listen to Big Joke links gunshots to B2bn airport project and "Download" to keep this file for educational purpose.

civilian : someone who does not belong to the armed forces or the police - พลเรือน

commissioner : the head of a particular police force in some countries - ผู้ตรวจการณ์

contractor : a person or company whose job is to do work for another person, organisation, company, etc. - ผู้รับเหมา

efficiency : the ability to work well and produce good results by using the available time, money, supplies etc in the most effective way - ความมีประสิทธิภาพ

interrogator : a person who asks someone a lot of questions in order to get information - ผู้สอบถาม, ผู้ซักถาม

scan : to look at something very carefully, because you hope or expect to see a particular person or thing - มองกวาด, ดูผ่าน ๆ ตา

successor : a person or thing that comes after someone or something and takes their/its place  - ผู้สืบทอด, ดำรงตำแหน่งต่อ