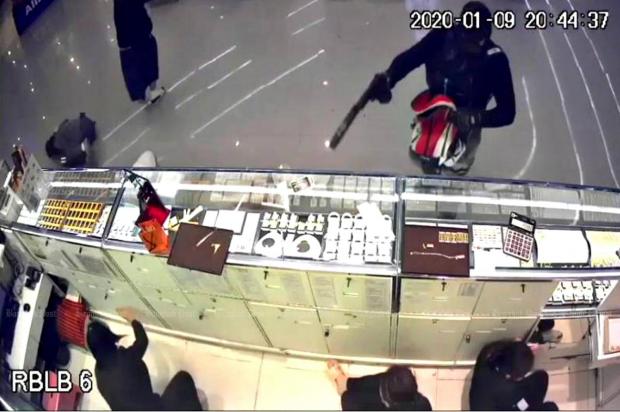 An image of a robbery suspect, who killed three people and injured four others, is captured by a security camera as he raided Aurora gold shop at a Robinson shopping mall in Lop Buri's Muang district late on Thursday night. (Aurora gold shop's CCTV photo)

Investigators are targeting a former military officer as they hunt the robber who killed three people and wounded four others during a gold shop heist last Thursday, according to a high-ranking police source.

The source, who asked not to be named, said national police chief Chakthip Chaijinda flew to Lop Buri on Sunday evening to hold an urgent meeting with the investigating team.

Another source said police are looking for a man aged 35-40 and 165-168cm tall, who has been well trained in using guns.

In a media interview, deputy national police chief Pol Gen Suchart Teerasawat said police are examining records of registered private firearms in Lop Buri in the hope of catching the killer. There are about 300 registered firearms in the province.

An investigation found the robber fired 13 shots. However, given the "tactical" style of the shooting, he was quite confident the shooter is not a state official.

He said more police are being deployed to help bring the investigation to speed and track down the robber while insisting there has been some progress but certain details cannot be discussed.

The deputy police chief said that the probe is also looking at the possibility that the suspect had a background in shooting sports.

Pol Maj Gen Nattapol Sukrasorn, commander of Lop Buri provincial police, said yesterday the focus of the investigation remains on the robbery, but police have not ruled out other possible motives.

He also warned anyone against dressing up like the robber, saying they should be sensitive to the victims' families.

A source in the Crime Suppression Division (CSD) said the officers are working with local police to examine footage from surveillance cameras on several roads to pinpoint the escape route.

The CSD officers have also asked local gun specialists for information about the suspect's gun and the silencer, said the source. The silencer appears to be "Thai made" and this type of equipment is owned by a very limited group of gun enthusiasts.

Meanwhile, Aurora gold shop opened for business for the first time since the robbery as security was being stepped up in Robinson shopping mall where the attack took place. The suspect had made off with 28.5 baht weight of gold, worth about 635,000 baht.

Financial assistance has also poured in for the families of the shooting victims.

enthusiast : a person who is very interested in something and spends a lot of time doing it - คนที่กระตือรือร้น

heist : (informal) an act of stealing something valuable, especially from a shop/store or bank - การปล้น (คำสแลง)

pinpoint : to discover exactly where something is - หาตำแหน่ง

sensitive : aware of and able to understand other people and their feelings - ซึ่งรู้สึกไว, ซึ่งตอบสนองได้ง่าย

surveillance : the process of carefully watching a person or place that may be involved in a criminal activity - การตรวจตรา