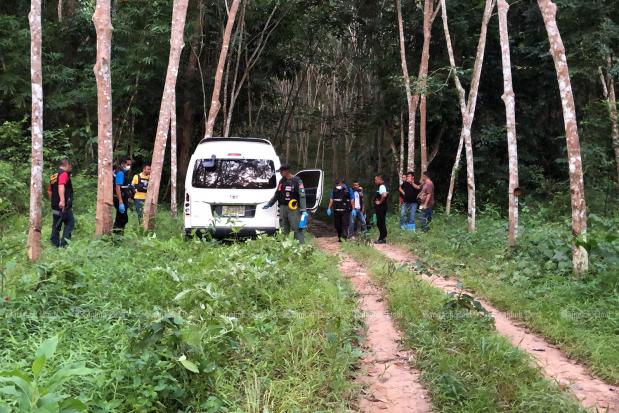 Police find a van used by armed men in the gold robbery in a rubber plantation, about 15 kilometres from the gold shop. (Photo by Assawin Pakkawan)

People are now facing higher risks to their security and personal wellbeing than a year ago, according to a survey by Suan Dusit Rajabhat University, or Suan Dusit Poll.

The poll was conducted on Jan 15-18 on 1,365 people throughout the country following a spate of serious crime news -- including rapes, robberies and drug dealing -- ending with the gold shop robbery in Lop Buri province.

Asked about risks to their personal security, a majority of respondents -- 67.69% -- said they have become more serious over the past year as a result of the economic slump, deteriorated social conditions and low moral standards; 27.47% said security in life and property remains the same as before; and 4.84% said risks to life and security have decreased as the government has taken more measures against crime.

Asked what causes the risks to their personal security, 53.87% pointed to the poor economy; 24.46% cited deteriorated social conditions, social disparities and a low standard of living; 21.36% cited the government's inability to solve economic problems, forcing people to help themselves; 18.27% said they reflect people's low moral standards; and 14.55% cited poor enforcement of the laws.

Asked to identify the security threats they most fear, 67.59% pointed to robberies; 32.76% said of use of violence and weapons such as guns and knives; 25.17% cited the spread of narcotic drugs; 21.38% pointed to sexual offences; and 15.17% cited the problem of toxic smog.

Click "play" to listen to Thailand now more dangerous: Poll and "Download" to keep this file for educational purpose.

enforcement : the process of making sure that something happens, especially that people obey a law or rule - การบังคับใช้กฎหมาย

moral : relating to right and wrong and the way that people should behave - ทางศีลธรรม, เกี่ยวกับความรู้สึกผิดชอบชั่วดี

narcotic : an llegal drugs such as heroin, cocaine or crystal methamphetamine - ยาเสพย์ติด

security : a feeling of confidence and safety, or a situation in which you can feel confident and safe - ความมั่นคง, เสถียรภาพ

slump : a period when an economy is much less successful than before and many people lose their jobs - ช่วงเศรษฐกิจตกต่ำ

spate : a large number of things of the same type, usually bad things, that suddenly happen in a very short period of time - ปริมาณมากมาย,จำนวนมากมาย

toxic : poisonous and harmful to people, animals or the environment - เป็นพิษ