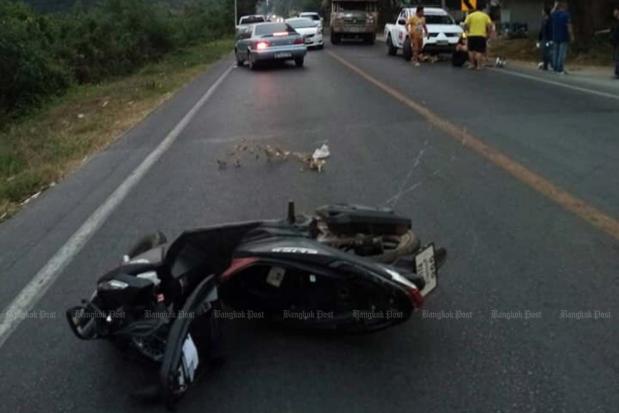 The tourists' motorbike is left lying on the road in Kanchanaburi after two women were swept off it by a cable hanging across the road at neck level on Saturday. (Photo by Piyarat Chongcharoen)

KANCHANABURI: Two women tourists sightseeing on a motorbike were injured when they ran into a telecom cable hanging at neck-level across a road on Saturday.

The incident occurred on Kanchanaburi-Dan Ma Kham Tia road in front of a petrol station in tambon Ko Samrong.

Christina Gandia, from Spain, who was driving the motorbike, sustained a deep cut in the neck while pillion rider Ana Moncada, from Argentina, suffered minor injuries.

The two women told police they rented a small motorbike to enjoy the natural beauty of the area. Their trip was ended by a cable hanging across road at the height of their necks. It swept them both off the bike and to the ground.

They were taken to hospital for treatment and further examination.

Police were investigating, and said they would find out which company owns the cable and was legally responsible.

Click "play" to listen to Neck-high cable sweeps tourists off motorcycle and "Download" to keep this file for educational purpose.

neck : the part of the body between the head and the shoulders - ลำคอ (อวัยวะ), คอ

pillion rider (noun): a person who rides behind the driver of a motorcycle or bicycle - ผู้ที่นั่งบนเบาะนั่งซ้อนท้าย (รถจักรยานยนต์, จักรยาน)

swept (past form sweep) : to move or spread quickly through an area; to move something or someone with powerful force - เคลื่อนไปอย่างรวดเร็ว, พัดพาเอาไป