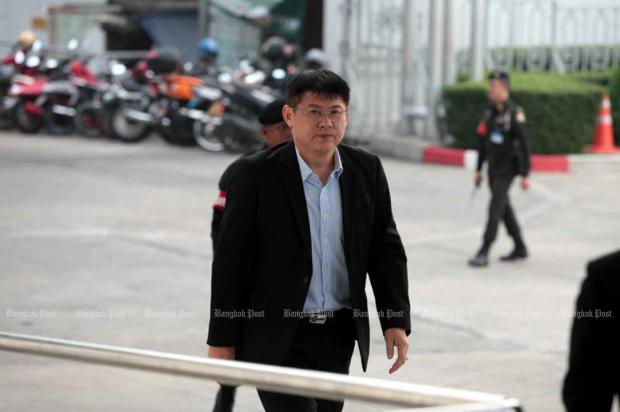 Former TV news anchor Sorrayuth Suthassanachinda arrives at the Central Criminal Court for Corruption and Misconduct Cases in Bangkok on Tuesday morning to hear the Supreme Court's decision on his appeal. (Photo by Chanat Katanyu)

Former TV news anchor Sorrayuth Suthassanachinda lost his final appeal and the Supreme Court sent him to prison for eight years on Tuesday.

Sorrayuth, 53, was found guilty of supporting the wrongdoing of a government official who did not report extra commercials in Sorrayuth's news programme on state-run MCOT's TV channel from Feb 4, 2005 to April 28, 2006. This cost MCOT 138 million baht, its share of the revenue.

The court found that Sorrayuth's firm Raisom bribed the official, paying about 600,000 baht, to alter the records. Evidence showed that records of commercials were erased with correction fluid 17 times.

The Supreme Court shortened his total sentence to eight years, comprising 6 years and 2 years, from the 13 years and four months handed down by the Appeal Court three years ago.

Pichapa Iamsa-ard, 50, the MCOT official, was sentenced to a reduced 12 years in prison for malfeasance causing damage to the MCOT. Her term was shortened from 20 years.

Click "play" to listen to TV news anchor Sorrayuth sent to prison for 8 years and "Download" to keep this file for educational purpose.

appeal (noun): a request that a decision be changed - การอุทธรณ์

Appeal Court (Court of Appeal)  : a court that decides requests that a decision made by a lower court be changed - ศาลอุทธรณ์

bribe : to give money or presents to someone so that they will help you by doing something dishonest or illegal - ติดสินบน

commercial : an advertisement on the radio or on television - โฆษณาทางโทรทัศน์หรือวิทยุ

comprise : to consist or be made up of two or more things - ประกอบด้วย

malfeasance : illegal actions, especially by a person in authority - การใช้อำนาจไปในทางที่ผิด

wrongdoing : breaking the law or doing something "wrong" - กระทำผิดศีลธรรม, ละเมิดกฎหมาย