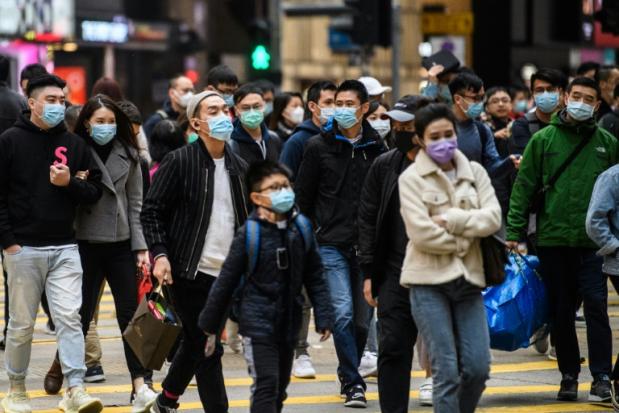 Pedestrians wearing face masks cross a road during a Lunar New Year of the Rat public holiday in Hong Kong on January 27, 2020, as a preventative measure following a coronavirus outbreak which began in the Chinese city of Wuhan

PARIS - A deadly novel coronavirus outbreak, which has infected more than 4,500 people and spread to 15 countries since emerging in China, has also spawned many false claims on social media.

In Australia, multiple Facebook posts shared hundreds of times claimed to show a list of foods and locations in Sydney which have been contaminated by the new coronavirus strain first discovered in the Chinese city of Wuhan in late December.

One post, published on January 27, identified different types of rice, cookies and onion rings that allegedly contain traces of the virus. It also claimed that a "bureau of diseasology" had run tests and discovered the strain in several Sydney suburbs.

But the local health authority told AFP the locations listed posed no risk to visitors, and the foods named did not appear in the New South Wales food authority's list of recalls and advisories.

A video viewed more than 88,000 times on Facebook claimed to show the market in Wuhan where the virus strain began. In reality, it was filmed at an Indonesian market.

The post was published on an account in the Philippines on January 26, 2020. The footage showed bats, rats, snakes and an assortment of other animal meat products being sold at a busy market.

AFP was able to confirm the video was in fact captured at a market in Indonesia in 2019.

In Sri Lanka, a Facebook post shared thousands of times claimed doctors were projecting that the entire population of Wuhan -- a city of 11 million people -- would likely die of the coronavirus.

This is false; Chinese authorities have made no such projection.

Multiple posts on Weibo, Twitter and Facebook claimed a Chinese expert had told people to rinse their mouths with salt water to prevent infection from a new virus outbreak.

But the claim is false; the expert's team said saline would not "kill" the new virus and urged people not to believe or share medically-inaccurate online rumours.

Multiple posts on Facebook and Twitter alleged that the novel coronavirus was created on purpose -- with theories including that it was manufactured by the US Centers for Disease Control and Prevention.

The posts included patents, but these were registered to combat different strains of coronavirus, for example by developing vaccines.

In France, several social media posts have circulated with claims that people had been contaminated with the novel coronavirus in several parts of the country.

These false reports were accompanied by images made to look like they were screenshots from several French news sources -- including AFP.

However, these images were digitally manipulated. No cases have been confirmed in these departments.

advisory : an official warning that something bad is going to happen and, often, how to deal with it - คำเตือน; การแนะนำ

conspiracy : a secret plan by a group of people to do something bad or illegal - การวางแผนอย่างลับๆ การสมรู้ร่วมคิด

contaminated : made dirty, polluted or poisonous by the addition of a chemical, waste or infection - ปนเปื้อน

debunk : to show that an idea, a belief, etc. is false; to show that something is not as good as people think it is - แสดงให้เห็นว่าความคิดหรือความเชื่อนั้นผิด, หักล้างความคิด

entire : including everything, everyone or every part - ทั้งหมด

manipulate : to control something or someone to your advantage, often unfairly or dishonestly - ชักใย

on purpose : intentional; deliberate; do on purpose - อย่างตั้งใจ

patent : an official document that gives someone who has invented something the legal right to make or sell that invention for a particular period of time, and prevents anyone else from doing so - สิทธิบัตร

projection : a calculation or guess about the future based on information that you have - การคาดคะเน

reality : what is actually happening - ความเป็นจริง

recall (verb): to order somebody to return; to order that something be returned - เรียกกลับ

theory : one or more ideas that explain how or why something happens - สมมติฐาน

trace : a very small amount of a substance - จำนวนเล็กๆ

vaccine : a substance which contains a form that is not harmful of a virus or bacterium (= extremely small organism) and which is given to a person or animal to prevent them from getting the disease which the virus or bacterium causes - วัคซีน