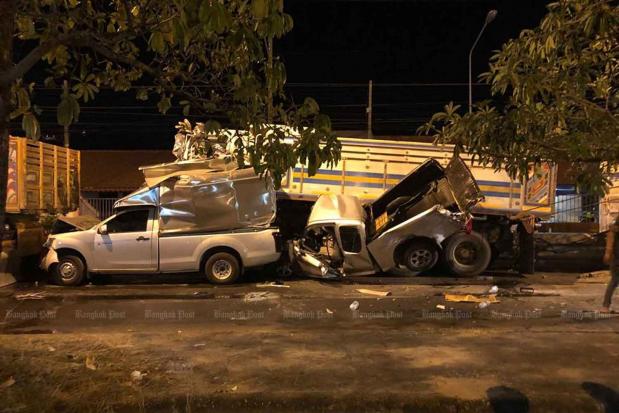 Eight vehicles were involved in this fatal pile-up at an intersection on the city bypass in Muang district, Prachin Buri, on Wednesday evening. (Photo by Manit Sanubboon)

PRACHIN BURI: An eight-vehicle pile-up at a traffic light killed one person and injured another on a major highway on Wednesday evening.

Orapin Roongthanawut, 44, said she was slowing down her Honda City car to stop at a red light when an 18-wheel trailer truck crashed into the rear. Her car was pushed forward into a 10-wheel truck, which then crushed a pickup truck against a truck in front of it, with a continuing domino effect.

bypass : a road that goes round a town or city so that you can avoid going through its centre - ถนนรอบเมือง

crush : to press something so hard that it flattens or breaks into very small pieces - กด  บีบอัด

domino effect (noun): the consequence of one event setting off a chain of similar events (like a falling domino causing a whole row of upended dominos to fall) - ผลกระทบต่อเนื่อง

trailer : a truck, or a container with wheels, that is pulled by another vehicle - รถพ่วง