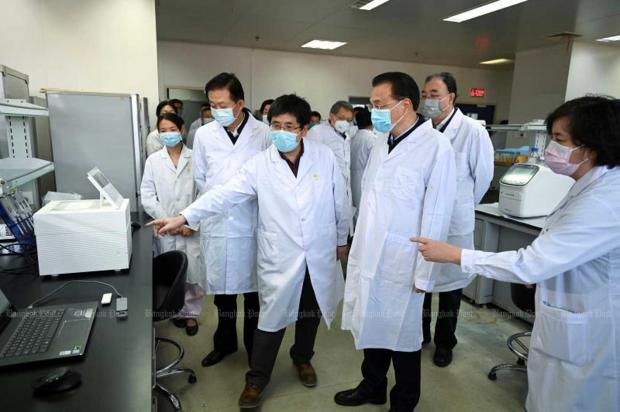 Chinese Premier Li Keqiang, who heads a leading group on the prevention and control of the novel coronavirus outbreak, visits the Chinese Centre for Disease Control and Prevention in Beijing, China, on Thursday. (Photo: cns/Reuters)

BEIJING: Cases of a new coronavirus in China have jumped to over 9,600, with 213 deaths, local health authorities said on Friday, after the World Health Organization declared the outbreak a global public health emergency overnight.

With the pneumonia-causing virus continuing its rapid spread, South Korea joined other countries that have evacuated their citizens from the central Chinese city of Wuhan, the epicentre of the outbreak.

China's National Health Commission said the number of infections rose by around 1,980 on Thursday from the previous day, with the death toll rising by 43. The vast majority of deaths have been in Hubei Province, of which Wuhan is the capital.

Infections have now been reported in all of the country's 31 provincial-level regions, with the report of a case in the remote Tibet Autonomous Region on Thursday.

The virus has now infected more people than the SARS virus did during its 2002-2003 outbreak, in which 8,098 people were stricken and 774 killed worldwide.

The new coronavirus has also spread to around 20 countries, including in Asia, Europe, North America and the Middle East, though the number of confirmed cases is relatively limited.

The WHO declared a global emergency amid concern over the rising number of confirmed cases around the world and potentially major impacts on business and travel.

Click "play" to listen to Coronavirus cases near 10,000, global emergency declared and "Download" to keep this file for educational purpose.

autonomous (adj): independent and having the power to make your own decisions - ซึ่งปกครองตนเอง

emergency : an unexpected situation involving danger in which immediate action is necessary - เหตุฉุกเฉิน

evacuate : to force to leave an area - ถูกไล่ที่

limited : not much or enough; not very great in amount or extent - จำกัด

stricken : affected by serious problems such as injury or illness - ได้รับผลกระทบจากปัญหาหนักหน่วง