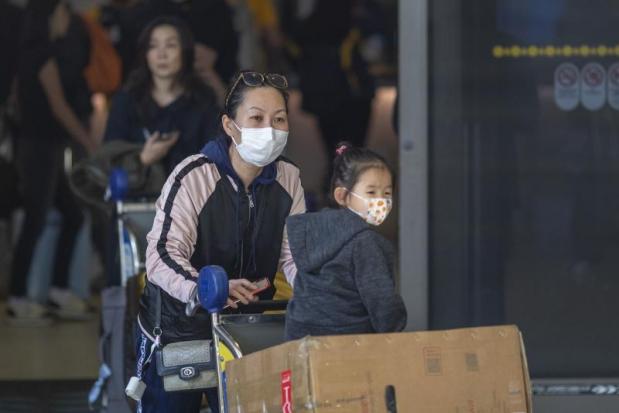 China's death toll from the coronavirus epidemic hit 360 on Monday, with deepening global concern about the outbreak and governments closing their borders to people from China.

The fresh toll came a day after China imposed a lockdown on a major city far from the epicentre and the first fatality outside the country was reported in the Philippines.

Authorities in Hubei, the province at the epicentre of the outbreak, reported 56 new fatalities. That took the toll in China to 360, exceeding the 349 mainland fatalities from the 2002-3 SARS outbreak.

Struggling to contain the virus, authorities took action in the eastern city of Wenzhou on Sunday, closing roads and confining people to their homes. Wenzhou is some 800 kilometres from Wuhan, the metropolis at the heart of the health emergency.

Since emerging out of Wuhan late last year, the new coronavirus has infected more than 16,400 people across China and reached 24 nations.

The G7 countries -- Canada, France, Germany, Italy, Japan, the United Kingdom and the United States -- have all confirmed cases of the virus. They will discuss a joint response, German Health Minister Jens Spahn said on Sunday.

In Thailand, which has 19 confirmed cases, doctors said Sunday an elderly Chinese patient treated with a cocktail of flu and HIV drugs had shown dramatic improvement and tested negative for the virus 48 hours later.

Most of the infections overseas have been detected in people who travelled from Wuhan, a city of 11 million people, or surrounding areas of Hubei province.

The man who died in the Philippines was a 44-year-old from Wuhan, according to the World Health Organization, which has declared the epidemic a global health emergency.

China has embarked on unprecedented efforts to contain the virus, which is believed to have jumped to humans from a Wuhan animal market, and can be transmitted among people.

The US, Australia, New Zealand and Israel have banned foreign nationals from visiting if they have been in China recently, and they have also warned their own citizens against travelling there.

Mongolia, Russia and Nepal have closed their land borders.

The number of countries reporting infections rose to 24 after Britain, Russia and Sweden confirmed their first cases this weekend. There were 2,103 new confirmed cases in hardest-hit Hubei province on Monday, bringing the total infected to more than 16,480.

Click "play" to listen to Virus deaths in China rise to 360 and "Download" to keep this file for educational purpose.

mainland : a large mass of land that forms the main part of a country but does not include any islands belonging to the country - แผ่นดินใหญ่

metropolis : a very large city, often the most important city in a large area or country - มหานคร

transmitted (verb): sent, spread from one person or animal to another - ส่ง, ถ่าย

unprecedented : never having happened before - ที่ไม่เคยเกิดขึ้นมาก่อน