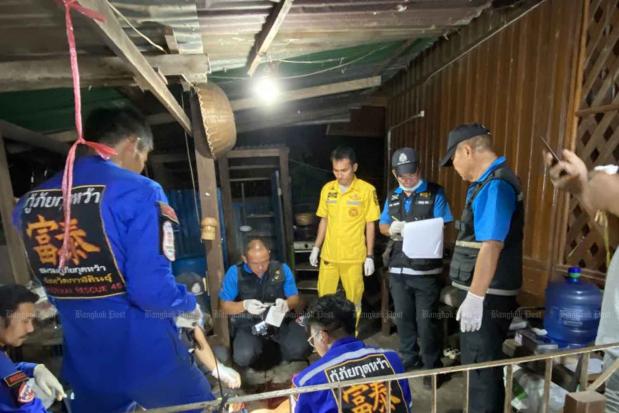 A police officer was found stabbed to death, his body mutilated, in Kalasin early on Monday.

Police later arrested a man aged about 40. Investigators said the man's wife had an affair with the victim.

Police, hospital staff and a rescue unit rushed to tambon Kamalasai about 1.30am after the body's discovery was reported.

In a wooden house under construction, the body of a man, wearing a black T-shirt and yellow-black shorts, was found lying face up in a pool of blood. He had been stabbed at least 20 times - on his torso, buttocks and thighs. His genitals were cut off.

Piles of leaves had been set on fire around the house. A fire was also set at the rear of a white Toyota Fortuner parked there. The fires had been put out by neighbours.

A son of Pol Lt Col Jamras told the police that his father usually stayed overnight at a house in Kalasin town. He occasionally spent the night at the wooden house in Kamalasai district.

His father formerly had an affair with a woman who told him she was a divorcee. He later stopped their relationship after learning that the woman was not divorced.

The son believed the woman wanted to return to his father, upsetting her husband. This could be a motive for murder, he said.

Click "play" to listen to Police officer murdered, mutilated and "Download" to keep this file for educational purpose.

affair : a sexual relationship between two people, especially when one of them is married to someone else - ความสัมพันธ์เชิงชู้สาว

buttocks : one of the two round parts of your body that you sit on - บั้นท้าย, ก้น

discovery : an act or the process of finding somebody/something, or learning about something that was not known about before - การค้นพบ

divorcee (noun): a person whose marriage has been legally ended, especially a woman - ผู้หย่า (หญิง), หญิงที่หย่ากับสามีแล้ว

genitals : a person's sex organs that are outside their body - อวัยวะสืบพันธุ์, ของลับ

put out : to end a fire; to extinguish a fire - ดับ

torso : the main part of the body, not including the head, arms or legs - ลำตัว

under construction : being built - กำลังสร้าง

victim : someone who has been harmed, injured or killed as the result of a crime - เหยื่อผู้เคราะห์ร้าย