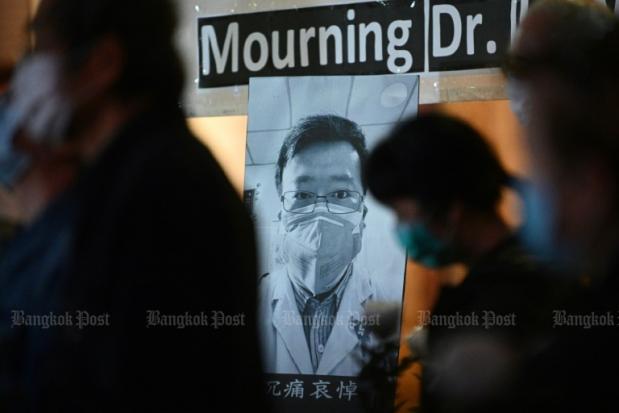 Whistleblowing doctor Li Wenliang's death sparked a rare outpouring of grief and anger on social media over the government's handling of the crisis.

BEIJING: The death toll from China's coronavirus outbreak rose to 717 on Saturday as the country became angry over an epidemic that claimed the life of a popular doctor and created global panic.

The toll has now surpassed the number of people who died in mainland China and Hong Kong during the 2002-2003 SARS outbreak, after another 81 people died in Hubei province.

More than 34,000 people have been infected in China by the virus, which is believed to have emerged in a market that sold exotic animals in Hubei's capital, Wuhan, late last year.

Chinese researchers said Friday that a pangolin -- an endangered mammal whose scales are used in traditional medicine and meat sold in black markets -- may have been a carrier of the disease that jumped to humans.

Hong Kong was to begin mandatory quarantine for those arriving from mainland China beginning Saturday, warning that anyone caught breaching the new rules faces up to six months in prison.

Two cruise ships carrying thousands of holidaymakers in Hong Kong and Japan have been placed under quarantine as authorities test people for infections.

On Friday, another 41 people tested positive aboard the Diamond Princess in Japan, bringing the total number of infected cases on the ship to 61.

Another cruise ship carrying a passenger suspected of infection with coronavirus will not be allowed to dock in southern Japan, the government said.

In Hong Kong, 3,600 people were confined aboard the World Dream, where eight former passengers have tested positive for the virus.

One of the latest victims of the epidemic was Li Wenliang, an doctor who was reprimanded by police in Wuhan after he sent a message to colleagues in December to sound the alarm about the virus.

His death on Friday at the age of 34 sparked grief and anger on social media over the government's handling of the crisis.

He contracted the disease while treating a patient and was hailed as a "hero" while people on Twitter-like Weibo railed against "fat officials" and demanded "freedom of speech".

carrier : when a human or animal has a disease -

exotic : interesting or exciting because of being unusual or not familiar - ผิดธรรมดา,ประหลาด

mammal : any animal of which the female gives birth to babies, not eggs, and feeds them on milk from her own body - สัตว์เลี้ยงลูกด้วยนม

rail : to express strong anger about something -

reprimand : to tell someone officially and in a serious way that something they have done is wrong - ตำหนิ, ว่ากล่าว

scales (noun): the thin plates of hard material that cover the skin of many fish and reptiles - เกล็ด