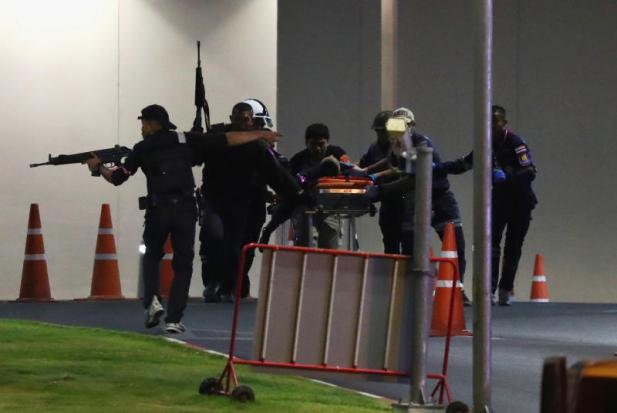 Security forces protect an injured police personnel who was evacuated from the Terminal 21 shopping mall on Sunday following a gun battle, to try to stop a soldier on a rampage after a mass shooting in Nakhon Ratchasima. (Reuters photo)

NAKHON RATCHASIMA: Police and soldiers rescued hundreds of people from a shopping mall late Saturday night as they continued to hunt for a gunman who had holed up inside after killing at least 25 people.

The carnage began when the assailant stole weapons and ammunition and shot dead his commander and two others at the Surathampithak army camp before fleeing in a stolen Humvee. He fired at civilians along the route to the Terminal 21 shopping mall in Muang district.

“The gunman used a machine gun and shot innocent victims resulting in many injured and dead,” said a police spokesman.

Local media showed video of the soldier getting out of a vehicle in front of the mall around 6pm and firing a series of shots, sending people running. Gunshots could be heard on the video.

The attacker then fired at a cooking gas cylinder, setting off an explosion and fire. Video clips showed people running away and hiding behind cars as shots rang out.

There were unconfirmed reports that the man had hand grenades on his body.

Troops from a special warfare unit were dispatched to the mall, where the attacker was said to be holding 16 people hostage on the fourth floor.

Police Crime Suppression Division commandos were also on the scene. Police were taking the man’s mother from Chaiyaphum province to Korat in hopes that she could persuade him to surrender.

Around 8.30pm, it was reported that special forces troops were preparing to “engage” the shooter inside the shopping centre. The army asked media outlets to stop providing live coverage in order to avoid giving the suspect information about official activities. 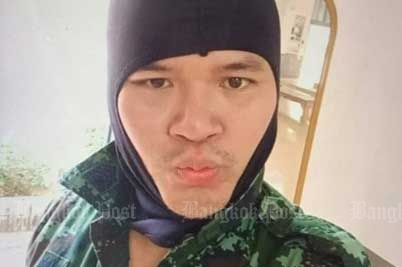 There were reports later that a gunfire exchange at 3.30am on Sunday led to the death of a police officer and two colleagues were injured. The death toll rose to 25 and the number of injured people increased to 33.

Security officers laid siege to the shopping mall Sunday morning. Crowds of people donated blood at local hosptials in response to health authorities' request to save the injured.

The slain commander has been identified as Col Anantharot Krasae, with whom the gunman was reported to have had a conflict. A 63-year-old woman said to be Col Anantharot’s mother-in law was also killed at the camp, along with another soldier.

Click "play" to listen to 25 killed as soldier opens fire in Korat and "Download" to keep this file for educational purpose.

assailant : someone who violently attacks another person - ผู้ทำร้าย

carnage : a situation in which there is a lot of death and destruction - การฆ่าอย่างโหดร้าย

collate (verb): to collect information together from different sources in order to examine and compare it - ตรวจเทียบ, ตรวจทาน, เก็บรวบรวม

cramp : a condition in which you experience a sudden pain when the muscles in a particular part of your body contract, usually caused by cold or too much exercise - ตะคริว

cylinder : an object shaped like a wide tube; a metal container for gas or liquid - กระบอก

engage : to cause to take part in a particular activity - ให้มีส่วนร่วมใน

grenade : a small bomb that someone throws or fires from a gun - ลูกระเบิดเล็ก

hostage : a person who is the prisoner of someone who threatens to kill them if they do not get what they want - ตัวประกัน

innocent : a person who has not done anything wrong - ผู้บริสุทธิ์

siege : a situation in which a group of people surround a building in order to protest about something or to force the people inside to come out - การเข้าห้อมล้อม