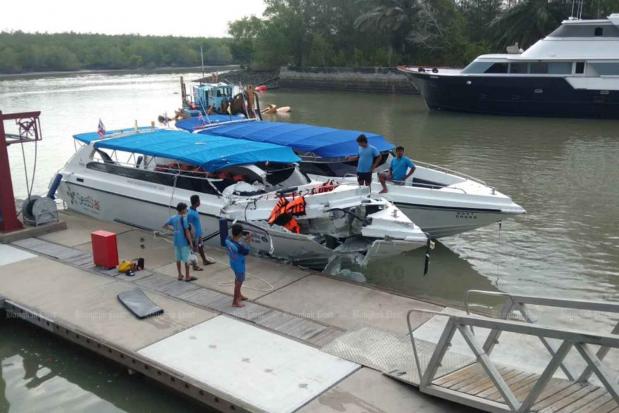 The damage to the 'Panan 5', of SeaStar Co, is evident at the dock after it collided with another boat leaving a marina in Phuket on Monday morning. (Marine police photo)

PHUKET: Two Russian children were killed and 21 other tourists injured when two speedboats collided in the sea about 7.50am on Monday.

Police said the collision happened at the channel near Phuket Boat Lagoon as Panan 5, operated by SeaStar Co in tambon Ratsada, was approaching the Royal Phuket Marina in tambon Ko Kaeo to pick up tourists.

It collided head-on with a boat operated by Andaman Leisure Phuket Co, which was leaving the marina with a full load of 35 passengers, mostly Russians.

Injured tourists were rushed to local hospitals. Two of them, a 12-year-old boy and a nine-year-old girl from Russia, later died of their injuries.

Police quoted eyewitnesses as saying the Panan 5 cut in at a junction and caused the collision.

The drivers of the two boats were charged with reckless driving causing deaths and injuries.

Click "play" to listen to Russian children killed in speedboat crash and "Download" to keep this file for educational purpose.

channel : a passage that water can flow along, especially in the ground, on the bottom of a river, etc - ร่องน้ำ, ช่องทาง

collision : an accident in which a vehicle or person that is moving crashes into something - การชนประสานงา

eyewitness : someone who sees something happen - พยานในเหตุการณ์

marina : a place where boats are kept -