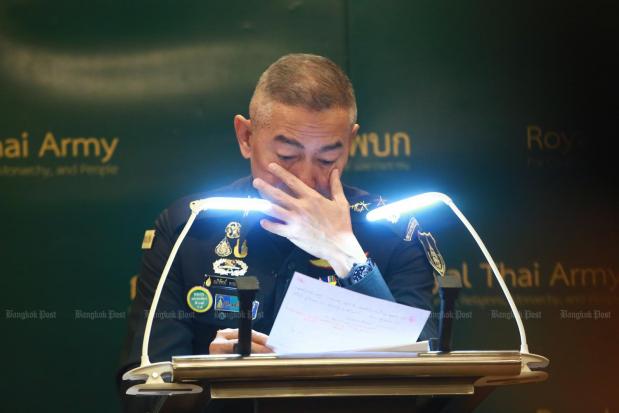 Army chief Gen Apirat Kongsompong weeps as he apologises for the mass shooting in Nakhon Ratchasima, during a media briefing at Royal Thai Army headquarters on Tuesday. Photo by Somchai Poomlard

Army chief Apirat Kongsompong has vowed to end unsound army projects, after these were raised as a possible motive behind a soldier's shooting spree in Nakhon Ratchasima that left 30 dead and 58 wounded.

Speaking at the Royal Thai Army headquarters on Tuesday, Gen Apirat apologised for Jakrapanth Thomma's rampage in a Korat shopping mall on Saturday.

"The moment he pulled the trigger he became a criminal, not a soldier anymore," he said.

The army chief admitted the shooter was maltreated by his commanding officer and the officer's relatives, and admitted there were many "unsound" projects, including for welfare housing, loans, and projects which involved cooperation between military units and merchants.

Gen Apirat said he had already terminated some of these projects, adding this was the first step in sorting out problems that had plagued the army for a long time.

He said that he had opened a channel via which lower ranks could file complaints against their superiors directly to him.

"As commander of the army, I apologise and I am wholeheartedly sorry that the man behind the incident was a soldier," he said, referring to 32-year-old Jakrapanth.

"I extend my condolences to the relatives of the slain victims."

Twenty-nine people were killed, and 58 other people suffered wounds before the gunman was killed by police commandos.

Apirat failed to hold back tears as he mentioned the people killed during the rampage.

"There are people who criticise the army. I urge them not to blame the army ... because the army is a sacred organisation ... Blame me", he said.

The army chief said he had no intention of resigning from his post. He is due to retire in September.

Click "play" to listen to 'Don't blame army' and "Download" to keep this file for educational purpose.

blame : to say or think that someone or something did something wrong or is responsible for something bad happening - โยนความผิดให้, ตำหนิ

condolences (noun): sympathy that you feel for somebody when a person in their family or that they know well has died; an expression of this sympathy - การแสดงความเสียใจต่อผู้อื่น

maltreatment (noun): very cruel treatment of a person or an animal - การทารุณ,การปฏิบัติไม่ดี

merchant : a person or business that buys and sells goods, especially one that trades with other countries - พ่อค้า, ผู้จำหน่าย, คนขาย

tears (noun): drops of water that come from your eyes when you cry or when something (dust, gas, etc.) has entered your eyes - น้ำตา

terminate : to end or stop something - ทำให้สิ้นสุด