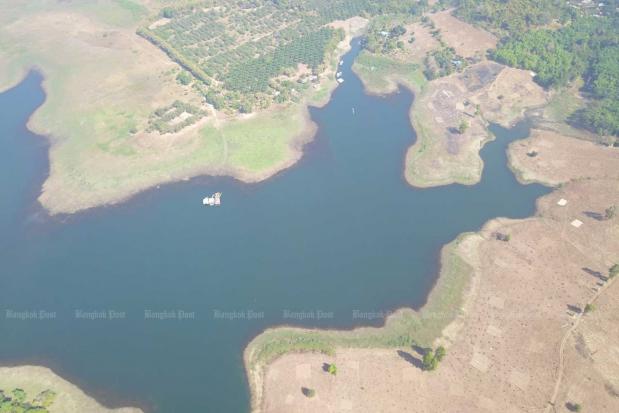 An aerial photo of land at the boundary of the Khao Laem National Park in Kanchanaburi province. (Photo supplied)

KANCHANABURI: Police are gathering evidence to summon wealthy investors from Bangkok to acknowledge charges of land encroachment as authorities expand their investigation into cases of land grabbing.

Officials from Khao Laem National Park filed a complaint against eight people for 200 rai of land under the national park which was occupied by investors from Bangkok.

On Friday, the 200 rai of land was confiscated in a joint operation by security officials from the Internal Security Operations Command's (Isoc) 4th operation centre, officials from Khao Laem National Park, police and provincial officials.

The land in prime locations next to Vajiralongkorn dam in Khao Laem National Park was approved for farming use by poor villagers who had been living in a nearby forest before, and the transfer of tenure rights was only meant for their descendants.

However the head of Isoc's 4th operation centre told the media that the investigation found tenure rights actually belonged to Montri Mankornkanok and five others from his wealthy family which owns the SET-listed Asia Fiber Plc.

Click "play" to listen to City rich wanted for park land grab and "Download" to keep this file for educational purpose.

confiscated : officially taken away as a punishment - ยึดทรัพย์

descendant : a relative of a person who lived in the past - ทายาท, ผู้สืบสายเลือด

encroachment : gradually entering and taking control over an area of land - การบุกรุก

occupied : when a person or people are at a place -

prime : of the best quality - ที่ดีที่สุด

suspected : thought to be something - เป็นที่สงสัย

wealthy : having a large amount of money, land, and other valuable things   - ที่มั่งคั่ง ร่ำรวย