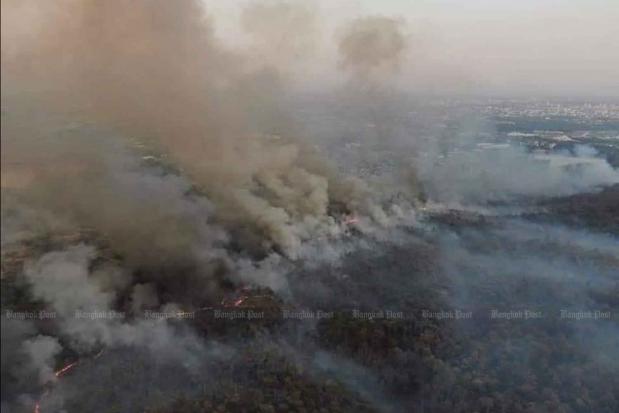 Chiang Mai province was hit by unprecedented levels of air pollution on Wednesday as intensifying forest fires sent PM2.5 levels in some areas up to 592, almost 12 times above safe levels.

Thailand's safe threshold for PM2.5 stands at 50 ug/m3, while the World Health Organisation's is set it at 25 ug/m3.

Komsan Suwan-ampa, deputy governor of Chiang Mai province, said that though forest fires have been a chronic problem for more than a decade, this year's situation was dire because fires had started in areas that are not accessible by firefighters and volunteers.

A fire started yesterday in Doi Suthep-Pui National Park in Hang Dong district, which had to be doused by helicopters, Mr Komsan said. Meanwhile, the fire-control centre reported that 218 hotspots in 18 districts in Chiang Mai have been detected.

Pralong Dumrongthai, director-general of the PCD, said that as forest fire hotspots in the North continue rising due to arson, open burning and pollution from bush fires set in neighbour countries, PM2.5 and PM10 particles will continue polluting the air. He added that six pollution control stations detected severely hazardous levels in their areas.

The authorities are offering a 5,000 baht bounty and imposing punishments such as 1 to 30 years in prison and fines of 10,000 to 3 million baht for the crimes.

accessible : that can be reached, entered, used, seen, etc - ที่สามารถเข้าได้

arson : the illegal use of fire to destroy a house, building, or property; an arsonist is a person who commits arson - การลอบวางเพลิง

bounty : money given as a reward, of for helping catch or kill a criminal - เงินรางวัล

douse : to make a fire stop burning by pouring water over it or to end a conflict - สาดน้ำหรือของเหลว, จุ่มในของ