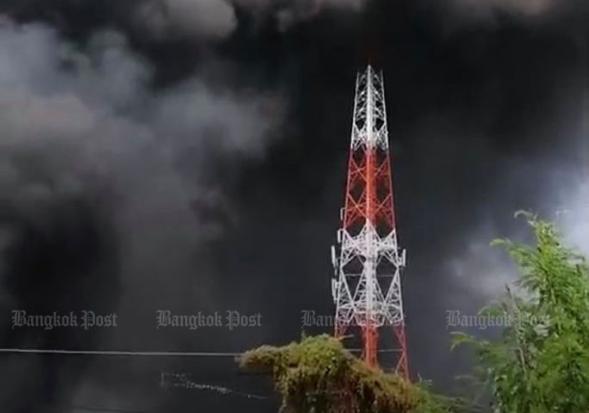 A riot erupted at the central prison in Buri Ram after about 100 prisoners broke furniture and smashed windows and set a fire over rumours of a Covid-19 outbreak on Sunday, Justice Minister Somsak Thepsutin said.

A number of prisoners escaped, he said, but seven have so far been recaptured.

Mr Somsak said the riot began at about 11.45am in the dining hall.

About 100 inmates, some of them facing a life sentence, set fire to the dining hall and demolished the visiting room for relatives. Thick smoke was seen billowing from the prison into the sky.

"The fact is that none of the prisoners in Buri Ram were infected [with the coronavirus] -- they only started this rumour to find some supporters," the minister said.

The breakout prompted prison officials to alert the governor and ask police and military personnel to set up checkpoints to catch the escaped inmates.

Police said five people were initially reported hurt in the incident. The situation had been brought under control but details were not yet clear.

Click "play" to listen to Prisoners escape in Buri Ram jail riot after Covid-19 rumour and "Download" to keep this file for educational purpose.

billow : to spread over a large area - ทำให้พอง

demolish : to completely destroy a building, especially in order to use the land for something else - รื้อ (สิ่งก่อสร้าง), ทำลาย

escape (verb): to get away from a place; to leave a place where you are in danger - หนี

life sentence : a punishment of life in prison - จำคุกตลอดชีวิต

prisoner : a person who is kept in prison as a punishment, or while they are waiting for trial - นักโทษ

rumour : a piece of information, or a story, that people talk about, but that may not be true - ข่าวลือ