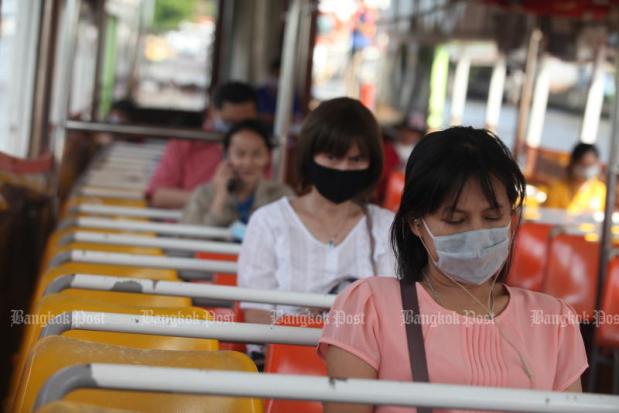 Commuters on board a Chao Phraya Express boat on Wednesday. (Photo by Arnun Chonmahatrakool)

The government has come up with a goal to cut public journeys by as much as 90% in order to limit new coronavirus infections.

The plan was proposed by army chief Gen Apirat Kongsomgpong at Monday's meeting of the Centre for Covid-19 Situation Administration (CCSA), according to spokesman Tawee­sin Visanuyothin.

Compared to March 21, the number of journeys made by the public one week later on Saturday had decreased by 46% after the government began implementing measures to encourage members of the public not to take unnecessary trips.

Personal car use fell by 41% while the number of electric train passengers had fallen by 59% during the same period, he said.

"We will have to continue asking for more public cooperation to achieve the 90% travel cut goal to flatten the curve of new infections. So far we've only achieved a 40% cut on average," Dr Taweesin said.

"The key to success in communicating with members of the public during this crisis is keeping them well informed and updated about the outbreak situation in the country via social media."

Click "play" to listen to Govt wants 90% cut in travel and "Download" to keep this file for educational purpose.

cooperation : a situation in which people or organisations work together to achieve a result that will benefit all of them - การร่วมมือกัน

curve : a line or surface that bends gradually; a smooth bend - เส้นโค้ง, ทางโค้ง

encourage : to cause someone to want to do something - กระตุ้น ให้การสนับสนุน

flatten : to make something flat -

implement : to make something such as an idea, plan, system or law start to work and be used - นำแผนหรือนโยบายมาปฏิบัติ, นำมาใช้

journey : travelling from one place to another, especially when they are far apart - การเดินทาง