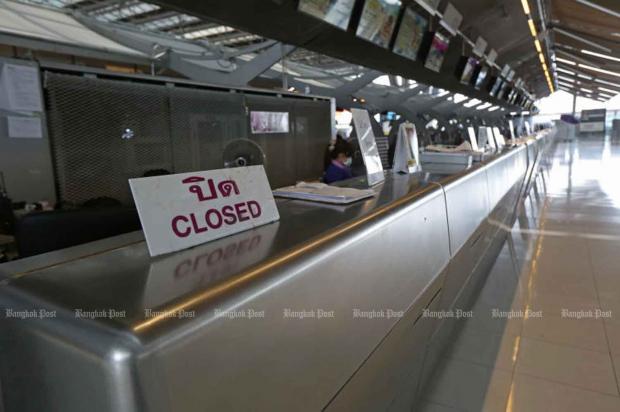 The check-in counter of Thai Airways International is closed at Suvarnabhumi airport in Samut Prakan province. The government blocks arrivals in the country until April 15 to curb Covid-19. (Photo by Varuth Hirunyatheb)

The government will block all travel to Thailand, including by Thais, for two weeks to prepare "state quarantine" facilities after more local patients have been linked to imported cases.

Dr Taweesin Visanuyothin, spokesman of the government's Centre for Covid-19 Situation Administration, said on Thursday that Prayut told the centre that arrivals by foreigners and Thais would have to be slowed down "to stop the disease".

The new measure started immediately on Thursday and will continue until April 15.

Dr Taweesin said recent arrivals had proved to be a major source of local infections. The cases included the infected Thai man who had visited Pakistan and died on a south-bound train in Prachuab Khiri Khan province.

He also cited six Thais who returned from meetings in Italy, four of whom tested positive. The cases led to the quarantine of 50 other people.

Besides, of the 132 Thai who had attended religious activities in Malaysia, 47 contracted the disease, four died and about 1,000 others were quarantined.

Of the 56 Thais who had attended religious ceremonies in Indonesia, 32 were infected and about 500 were quarantined.

Four Thai people from England contracted the disease and one of them died. This group included one who concealed his symptoms and returned to the country, Dr Taweesin said. About 200 people were quarantined as a result.

Also, 19 Thais crossing the border from Poi Pet in Cambodia were infected and about 300 had to be quarantined.

Click "play" to listen to Govt temporarily blocks all travel and "Download" to keep this file for educational purpose.

affected (verb): having received an effect or influence - ถูกผลกระทบ, มีผลต่อ

religious (adj.): relating to religion, or to the beliefs and practices of a particular religion - เกี่ยวกับศาสนา