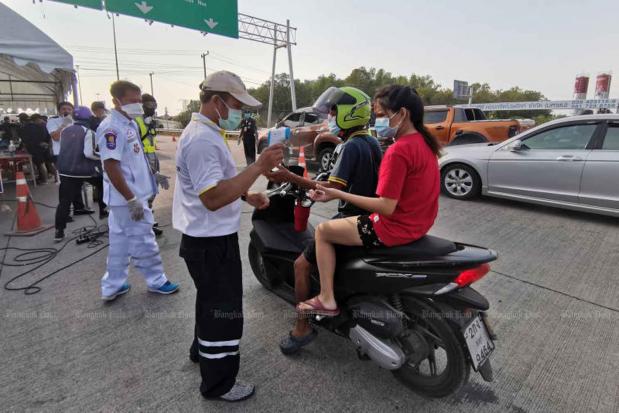 Pattaya will enforce a ramped-up coronavirus lockdown tomorrow with more screening checkpoints being set up.

Pattaya mayor Sonthaya Khunpluem said the number of checkpoints has been increased from five to eight along Sukhumvit Road leading to the city to screen vehicles and people entering.

Non-residents or people not working in Pattaya will not be allowed entry to the city until the situation returns to normal.

Most of those infected in Pattaya are foreigners and those who work closely with foreigners, Mr Sonthaya claimed.

Checkpoints have been spread across the town in order to prevent traffic congestion caused by motorists entering Pattaya via Sukhumvit Road.

People who are not residents but have to work in Pattaya can obtain passes permitting them to enter and leave the city at the Pattaya provincial hall or apply for one at all 7-11 stores in the city, or download one at https://www.pattaya.go.th/permission-certificate/.

People who hold house registrations in Banglamung district must also show their ID cards, along with the passes when going through the checkpoints, while those who live outside the Banglamung area but have to travel to work in Pattaya must also have letters signed by their employers.

The latter must also show letters signed by their landlords, community leaders, or community committee members.

Lorry drivers delivering goods in Pattaya must show letters as well as invoices from their companies, and those who have appointments with doctors must have an appointment letter from a doctor, Mr Sonthaya said.

Click "play" to listen to Pattaya mayor to impose stricter lockdown and "Download" to keep this file for educational purpose.

appointment : a formal arrangement to meet or visit somebody at a particular time, especially for a reason connected with their work - การนัดหมาย, การนัดพบ

pass (noun): a ticket, document or piece of paper that allows someone to enter some place such as a concert or a road or special event - สิทธิผ่าน, บัตรผ่าน

registration : the process of recording names or information on an official list - การขึ้นทะเบียน, การลงทะเบียน