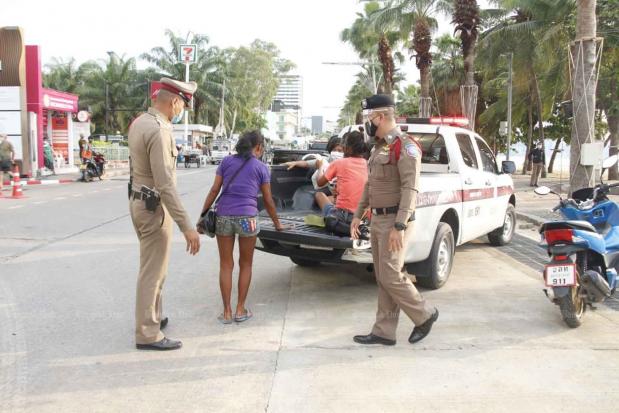 Some of the 23 people arrested for trespassing on Pattaya beach are loaded on a police vehicle before being taken to the police station and charged with violating the emergency decree. (Photo: Chaiyot Pupattanapong)

Police on Tuesday morning rounded up 23 people - 12 Thais and 11 foreigners - for trespassing on Pattaya beach in violation of the emergency decree.

The Pattaya City has issued a rule to temporarily ban people from using the Pattaya beach for various activities to stem the spread of the coronavirus, until the situation has improved.

Violators face a jail term not exceeding one year and/or a fine of up to 100,000 baht.

Many people have ignored the City order, despite regular beach patrols to keep them away.

On Tuesday morning, a team of Pattaya and tourist police on regular patrol arrested 12 Thais and 11 foreigners on the beach. Some of them were exercising, some sitting on mats and others playing in the water.

They were taken to Pattaya police station and charged with violating the emergency decree.

Click "play" to listen to 23 caught enjoying Pattaya beach and "Download" to keep this file for educational purpose.

ban : to officially say that someone is not allowed to do something   - ห้ามอย่างเป็นทางการ

charge : to accuse someone officially of committing a crime - ตั้งข้อกล่าวหา

fine : an amount of money that you have to pay because you have broken the law - ค่าปรับ

ignore : to fail to pay attention to; to pretend that you have not noticed or do not know about something - เพิกเฉย

patrol : a group of people or vehicles that move around a place in order to prevent trouble or crime - หน่วยลาดตระเวน

stem : to stop something from increasing or spreading - หยุดยั้ง,ยับยั้ง,สกัด

violators (noun): people who go against or refuse to obey a law, an agreement, etc. - ผู้ฝ่าฝืน, ผู้ละเมิดกฎ