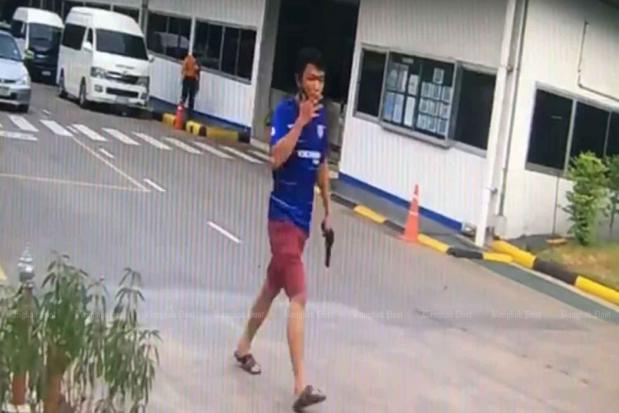 Suspect Thirawat Thamkhanthee, 27, gun in hand and smoking a cigarette, walks away from a factory in Samut Prakan province on Tuesday evening. He was later arrested for trying to kill a work colleague. (Photo supplied)

SAMUT PRAKAN: A man who fired several gunshots at a work colleague who told him not to smoke and then wounded his brother-in-law while shooting at police has been arrested in the eastern province of Rayong.

Thirawat Thamkhanthee, a 27-year-old from Kalasin province, was arrested in possession of an illegal gun in Rayong about 1am on Thursday.

On Tuesday evening, Mr Thirawat allegedly fired shots at another man who worked in the same factory in Phra Pradaeng district of Samut Prakan.

His target, Natsayos Yaithaisong, 40, said he was walking out of the factory and saw Mr Thirawat sitting  on a motorcycle across the road. Mr Thirawat drew a gun, ran onto the road and fired 4 or 5 shots at him.

Mr Natsayos said he fled back into the factory unscathed.

He said that in February he told Mr Thirawat in front of other workers not to smoke in the factory. Mr Thirawat had responded angrily.

They had not spoken since, Mr Natsayos said.

Mr Thirawat ran away, but police found him. His mother and brother-in-law were called to the scene and both called out, asking him to surrender. He responded by firing shots at the police, and a bullet hit and wounded his brother-in-law.

Police charged Mr Thirawat with attempted premeditated murder and illegal use and possession of a firearm.

Click "play" to listen to Man told not to smoke; shoots at colleague and "Download" to keep this file for educational purpose.

angrily (adv): in a way that shows you have strong feelings about something that you dislike very much or about an unfair situation - อย่างโกรธเคือง

unscathed : not harmed or damaged by something bad that has happened - ไม่ได้เสียหาย, ไม่ได้รับบาดเจ็บ