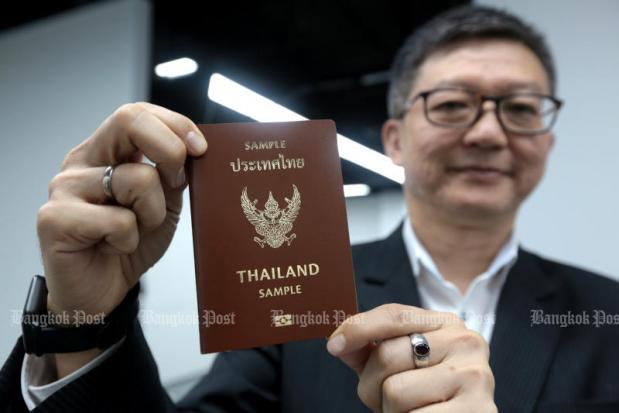 Consular department director-general Chatri Archjananun shows a copy of the new version of the passport on Wednesday, at a passport office in the MBK shopping centre. (Photo: Chanat Katanyu)

A new Thai passport was launched on Wednesday, with a plan to increase its validity for up to 10 years from next month.

The revamped passport was designed to increase security, both for the holder and the country. New features include an embossed signature and other biometric data, according to the consular department.

It also features key historical places from the Sukhothai to Rattanakosin periods printed on every page, to provide knowledge for the holders, according to the announcement.

A Thai passport is currently valid for five years from the date of issue.

The department said it planned to increase the expiry period to up to 10 years next month.

The department offices on Chaeng Watthana Road are temporarily closed for renovation.

Passport services have been moved to the nearby customer service centre building of CAT Telecom, next to the government complex.

The consular department also has passport offices in other locations throughout Bangkok and in other provinces.

Click "play" to listen to 10-year Thai passport launches and "Download" to keep this file for educational purpose.

complex : an area that has several parts - พื้นที่ประกอบด้วยส่วนต่าง ๆ

emboss (verb): to put a raised design or piece of writing on paper, leather, etc. - สลักลายนูนเพื่อตกแต่ง

issue : to give or provide something official - แจกจ่าย

revamp : to make a major change or revision to something - ปรับปรุงใหม่