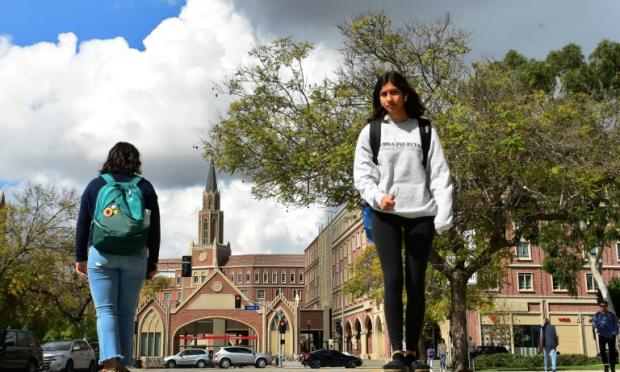 The US Immigration and Customs Enforcement announced that foreign students whose entire courses have moved online because of the coronavirus pandemic must return to their home country.

NEW YORK: Hundreds of thousands of foreigners enrolled in American universities are now fearing for their future after Donald Trump's administration threatened to revoke their visas.

The US Immigration and Customs Enforcement (ICE) announced this week that foreign students whose entire courses have moved online because of the coronavirus pandemic must return to their home country.

"I might be affected if they don't offer any sort of in-person class," said Pakistani student Taimoor Ahmed, an information technology student at Cal State University in Los Angeles.

Harvard and MIT launched a lawsuit Wednesday, asking the court to revoke the order that Harvard President Lawrence Bacow said had thrown higher education in the US "into chaos."

But the action has done little to alleviate the worries of foreign students, of which there were more than one million in the United States in 2019, a doubling in 20 years, according to the Institute of International Education (IEE).

"I'm kind of scared actually," said an Indian graduate student at a major Texas university, who asked not to be named.

He planned to continue with online classes in autumn but is now obliged to return to the campus -- in a state where Covid-19 cases are soaring -- or face deportation.

Some 84% of universities are planning to offer a hybrid system of in-person and online classes, according to the Chronicle of Higher Education website, which would save students from deportation.

Many students fear a resurgence of the pandemic later this year, though, which could see all classes moved online, forcing them to leave the country.

Students are not the only ones concerned: the universities themselves are worried that Trump's immigration policies are making their institutions less attractive.

They fear losing foreign students to cheaper colleges in Europe.

Click "play" to listen to Foreign students in US fear deportation and "Download" to keep this file for educational purpose.

attractive : having features or qualities that make something seem interesting and worth having - น่าดึงดูด

chaos : a situation in which everything is confused and in a mess - การจราจล

deportation : the process of forcing someone to leave a country, especially someone who has no legal right to be there or who has broken the law - การเนรเทศออกจากประเทศ

lawsuit : a case that a court is asked to decide involving a disagreement between two people or groups - คดีที่ยื่นฟ้องต่อศาล

obliged : required to do something - ต้องทำ

resurgence : a new increase of activity or interest in a particular subject or idea which had been forgotten for some time - การฟื้นคืน, การกลับสู่สภาพ