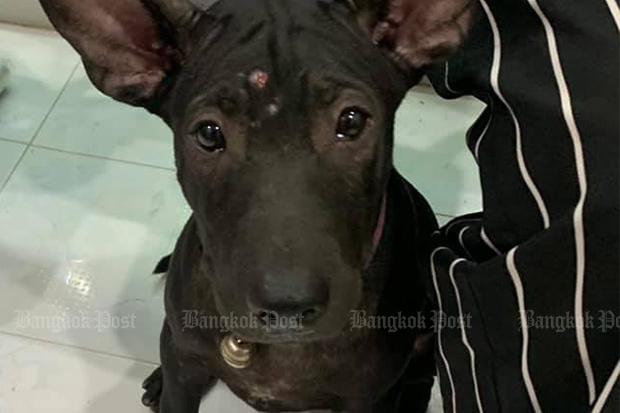 SAMUT PRAKAN: A four-month-old dog desperate to find its way home knocked on a clinic door for help.

Khiew Ngern was first noticed by an assistant at Phuttaraksa Animal Clinic, in Muang district of Samut Prakan, pacing back and forth outside the glass door about 8pm on Tuesday nght.

She went over to have a better look and saw Khiew Ngern barking and using its front paws to knock on the glass. She opened the door and allowed the dog to walk inside.

Veterinarian Saengduen Chotepanus said the dog was happy to see her. She checked with her files and found it was one of the pets she had treated at the clinic. She then called its owner.

Sunee Bunwara arrived to pick up her dog an hour later. She said Khiew Ngern had been missing since around 2pm, and had probably become lost.

Ms Sunee said the dog had received regular vaccinations at the clinic since it was born. She and the vet believed the dog was lost, but remembered its way to the clinic and went there for help.

missing (adj): lost; not able to find someone/something; not in the usual place because it has been removed or lost - ซึ่งหายไป

pace (noun): an act of stepping once when walking or running; the distance travelled when doing this - ก้าวเดิน

paw : the feet of animals such as bears, dogs and cats -