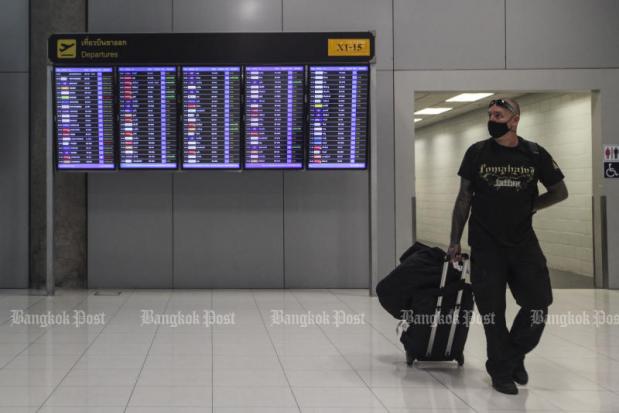 A traveller walks away from a panel displaying outbound flight information at Suvarnabhumi airport on Wednesday. (Photo by Arnun Chonmahatrakool)

A majority of people are still opposed to opening the country to foreigners who are not infected with Covid-19, according to a poll.

The poll was carried out by the National Institute of Development Administration, or Nida Poll, on July 6-8 on 1,251 people aged 18 and over of various levels of education and occupations throughout the country.

A proposed "medical and wellness" programme would open the country to foreigners who test negative for Covid-19 to receive medical treatment. They would be required to undergo a 14-day quarantine before being allowed to return to their home countries.

A majority - 55.32% - disagreed with the programme. Of them, 41.41% strongly disagreed with it, saying those admitted could cause a second wave of the pandemic,  while Thailand already has many infections imported by Thai returnees from abroad.

On the other side, 23.10% agreed, saying this would increase the reputation of Thai medical facilities and help the economy.

A second proposed programme would allow those foreigners admitted for medical treatment to travel around Thailand after a 14-day quarantine. Asked about this, 37.89% were against it and wanted Covid-19 to be 100% eradicated first because they had no confidence in the 14-day quarantine, while 14.55% disagreed with it.

On the other side, 24.14% strongly supported the programme, saying it would help tourism and the economy.

Asked about the travel bubble programme that would allow foreigners from countries free of Covid-19 to visit the country, a majority - 54.36% - supported it.

On the other side, 29.65% strongly opposed the programme, and a further 14.95% were in moderate disagreement for fear of a second wave of the pandemic.

Asked whether they were confident the government would be able to contain the spread of Covid-19 if foreigners were allowed into the country under these programmes, 59.63% were not confident while 39.33% were. The remaining 1.04% had no comment or were not interested.

Click "play" to listen to Majority against opening country to foreigners: Poll and "Download" to keep this file for educational purpose.

eradicate : to get rid of completely or destroy something bad - กำจัดจนหมดสิ้น

proposed : suggested as an idea for a group to consider - ถูกเสนอ

reputation : the opinion people have about how good or bad someone or something is - ชื่อเสียง

wave : an activity or situation which is happening again or is being repeated after a pause -