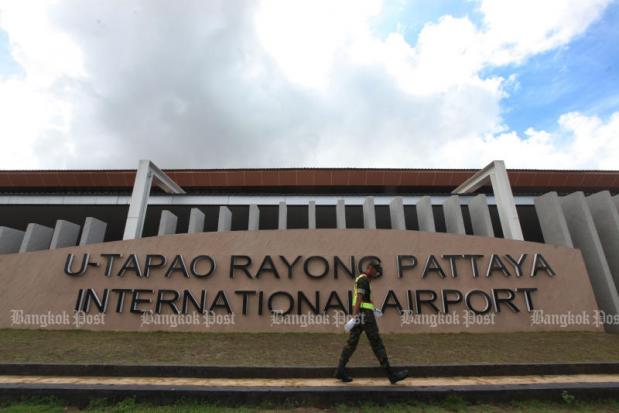 The Egyption delegation, including the soldier found to be infected with the coronavirus, arrived in Thailand at U-tapao airport in Rayong, with stop-offs in the UAE and Pakistan, on Wednesday. (Bangkok Post file photo)

Rayong governor Surasak Charoensirichote said on Monday he ordered the top two floors of the hotel  sealed off to prevent any spread of the virus after one of the guests, an Egyptian soldier, tested positive for Covid-19.

Two hotel staff in close contact with the patient were also placed in quarantine. They delivered room-service food to the group on Wednesday, he said. More staff could be put in state quarantine if they were found to have been at risk of contagion, he said.

The soldier and 30 others, including crew of their aircraft, departed Egypt on July 6 and went to the United Arab Emirates. They went on to Pakistan the following day, Tuesday, and arrived at U-tapao airport in Rayong on Wednesday. They stayed at the hotel in Rayong from Wednesday to Saturday. Some went outside to a shopping centre during their stay.

All returned to Egypt on Saturday and the test result coming out on Sunday showed a 43-year-old soldier with the delegation was infected with the virus.

The governor and Centre for Covid-19 Situation Administration refuse to name the places where they visited.

Mr Surasak said health authorities were checking CCTVs to track their activities in the province and people they contacted.

Holiday Inn and Suites City Centre Hotel in Rayong posted a Facebook message saying they group  had not stayed there. "No guests from Egypt or a military crew has stayed in our hotel since last year," it said.

Central Plaza also said the Egyptian had not visited its shopping centre in Rayong.

The visit has revealed lax screening procedures at U-tapao airport in Rayong.

The group were allowed to go outside the hotel where they were staying during their visit. According to earlier reports, the group did not need state quarantine because they were here less than 14 days, but they were required to undergo a virus test.

All were allowed to enter the country as they were defined as air crew under the conditions set by the Civil Aviation Authority of Thailand, according to the centre.

It remained unclear why they were allowed to go outside the hotel during their stay in Rayong. The CCSA did not go into details of how many of the group were soldiers or civilians.

Click "play" to listen to Hotel floors shut after Egyptian tests positive for virus and "Download" to keep this file for educational purpose.

contagion : when something spreads or passes from person to person, so that more and more people are affected - การติดต่อ,การแพร่กระจาย

crew : the people who work on a ship, aircraft, etc. - ลูกเรือ

delegation : a group of people who represent the views of an organisation, a country, etc - คณะผู้แทน, คณะบุคคลที่เป็นตัวแทนของคนกลุ่มใหญ่

lax : not paying enough attention to rules, or not caring enough about quality or safety - ละเลย

sealed off : to prevent people from entering or leaving an area or building - ปิด ห้ามไม่ให้เข้า