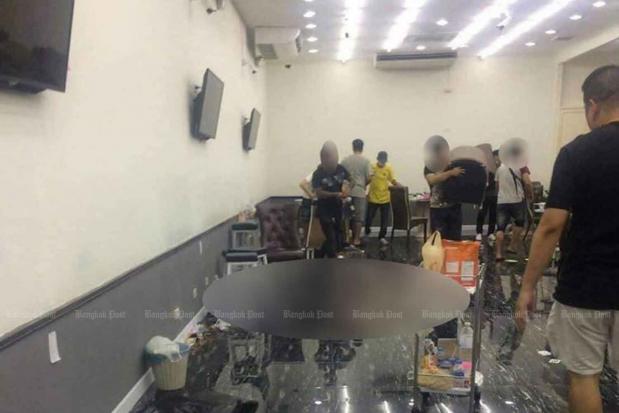 A police major was among four people shot dead at a gambling den in Yannawa district overnight, reportedly by a losing gambler. Police were hunting for the killer.

According to media reports, the shooting occurred after a man of Chinese appearance drew a gun, claimed  he was being cheated and demanded his money back.

The city police chief said on Tuesday the slain officer was not on duty. He was there for the gambling.

The den was operating on the ground floor of a four-storey commercial building surrounded by security cameras about 300 metres off Rama III Road in soi 66.

The premises had strong doors and access appeared heavily restricted. There were chairs and tables, and monitor screens on the walls.

Reports said several gunshots were fired about 10 o'clock on Monday night. Four people were killed - the police officer, another man and two women.

Click "play" to listen to Police major among 4 shot dead in gambling den and "Download" to keep this file for educational purpose.

appearance : the way that somebody/something looks on the outside - ลักษณะภายนอก, การปรากฏตัว

cheat : a person who cheats (acts in a dishonest way in order to gain an advantage) - คนโกง, คนหลอกลวง

premises : the buildings and land that a business or organisation uses - ที่ดินและสิ่งปลูกสร้าง

restricted : intended only for people who have been given special permission - ที่จำกัด