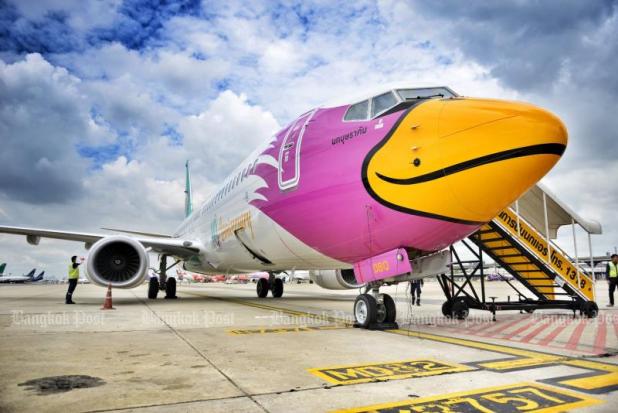 Nok Air blames more than 100 former and incumbent MPs for incurring 3.5 million baht in losses for flights they booked but never showed up for. (Bangkok Post photo)

More than 100 MPs are being blamed for Nok Air incurring 3.5 million baht in losses for flights they booked but never showed up for, according to Somboon Uthaiwiankul, secretary of House Speaker Chuan Leekpai.

Mr Somboon said the issue was raised by executives of the airline during a conversation with Mr Chuan recently. They met the House Speaker to offer him their best wishes on his birthday on July 28. The executives told Mr Chuan that 113 former and current MPs have not paid for seats they reserved on Nok Air flights which they later failed to show up for, said Mr Somboon.

The airline could not make the reserved seats available to other customers and the MPs did not cancel the reservations, which meant the company, already battered financially, incurred further losses. Nok Air has filed for rehabilitation protection with the Central Bankruptcy Court.

Mr Somboon said the airline complained that it could not obtain reimbursements from parliament because the MPs did not actually travel on the flights.

Normally, low-cost carriers such as Thai AirAsia require payments for air tickets to be made at the time of booking. The airfares become expensive during peak periods.

Mr Somboon said at least five MPs each caused the airline losses of over 100,000 baht. They are well-known and wealthy people.

According to Mr Somboon, Mr Chuan deemed the issue a personal matter to be settled by the individual MPs.

It is the responsibility of the MPs to account for their own actions, Mr Somboon said quoting Mr Chuan.

At the end of last month, Nok Air was reported to have 26.79 billion baht worth of debt as of March 31.

Nok Air chief executive Wutthiphum Jurangkool said Covid-19 prevented the airline from flying its 18 international routes, while domestic flights were at 30% of its pre-pandemic schedule.

Click "play" to listen to Nok Air loses millions on no-show MPs and "Download" to keep this file for educational purpose.

bankruptcy (noun): when a business runs out of money, cannot pay its debts and has to stop doing business; business failure - การล้มละลาย

House Speaker : the person who is in charge of most of the activities of the House of Representatives - ประธานสภาผู้แทนราษฎร

no-show (noun): not coming to an event or appointment - การไม่ปรากฏตัว

rehabilitation : the process of returning someone or something to a good or healthy condition, state or way of living - การทำให้กลับสู่สภาพเดิม, การทำให้กลับมาดีเหมือนเดิม

reimbursement : a payment to someone who has spent money on something - การชำระเงินคืน