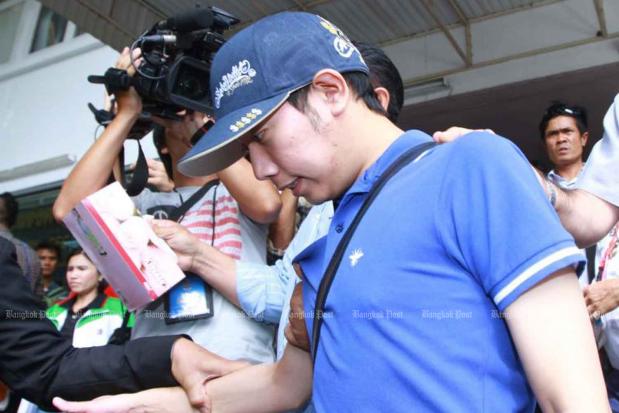 Vorayuth "Boss" Yoovidhya is led by police after his hit-and-run crash in Bangkok on Sept 3, 2012. (Photo: Somchai Poomlard)

A new prosecutors' panel has ordered police to investigate whether Red Bull scion Vorayuth Yoovidhya abused cocaine, as well as ordering a reinvestigation into the speed of his Ferrari when it crashed into a police officer in his fatal hit-and-run case in 2012.

Prayut Petcharakhun, executive director of the Office of the Attorney-General's Department of Criminal Litigation, on Monday said the attorney-general formed the new committee of prosecutors on Aug 4. It has taken over the case following the earlier decision by prosecutors and police not to arraign Mr Vorayuth for reckless driving causing death.

Mr Prayut, a member of the new panel, said that in a Monday meeting, it decided to order police to gather witnesses and evidence concerning the speed of Mr Vorayuth's car speed and allegations he had used cocaine.

Police will ask specialists who gave different estimates of the crash speed how they made their calculations, said the head of the new committee.

There was a wide variation in the specialists' estimates.  Earlier the charge of reckless driving causing death was dropped on the basis there was no evidence that Mr Vorayut had driven at high speed.

The committee had also ordered police to open a new case of alleged cocaine abuse against Mr Vorayuth because there was sufficient evidence of the illegal drug in his blood.

Police would finish the interrogation by Aug 20.

arraign (verb): to bring somebody to court in order to formally accuse them of a crime - ฟ้องกล่าวโทษ,นำตัวขึ้นศาล

Attorney-General : the top legal officer in some countries, who advises the leader of the government - อัยการสูงสุด