'Leave the monarchy out of it' | Bangkok Post: learning 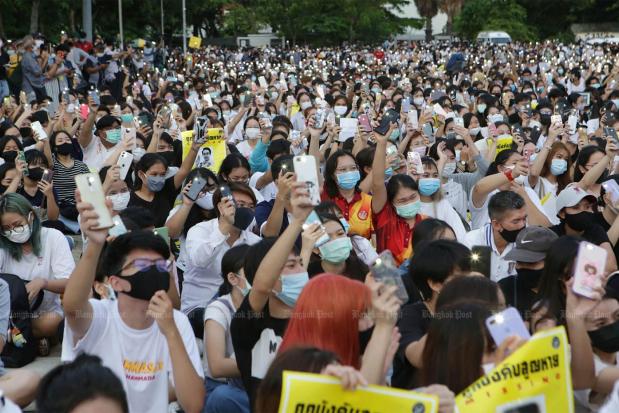 Anti-government protesters were on Monday warned to avoid involving the monarchy in political conflict.

Rallies by both royalists and their opponents ended without incident.

Speaking before the rallies took place, Digital Economy and Society Minister Buddhipongse Punnakanta said that while it was normal for people to hold different political opinions, they must not violate the rights of others nor offend the monarchy.

Mr Buddhipongse also said that social networks must be used carefully as some information had been distorted, leading to misunderstanding, confusion and even hatred. He then warned protesters from both camps to avoid confrontation, saying such clashes would be damaging to the country.

Meanwhile, anti-government protesters made clear their position on constitutional issues, demanding a new charter be written to end the prolonged hold on power by the government.

They made their call outside parliament, which was the venue of the two rallies on Monday. Another group gathered nearby with a pledge to protect the monarchy.

About 30 activists and members of the Committee Campaigning for a People's Constitution (CCPC) took part in the rally. "The 2017 constitution was designed to prolong the power of the coup makers," said CCPC leader Anusorn Unno.

Security officers were deployed to maintain order but no violence was reported and the two groups later dispersed.

Student protesters also held an anti-government rally to criticise the government at Thammasat University's Rangsit Campus, where I-Law, an organisation monitoring human rights and laws, launched a campaign to gather 50,000 signatures to push for amendments to the constitution.

distorted (verb): changed something such as information, colour, etc. so that it is no longer true or accurate - บิดเบือน